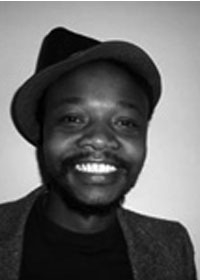 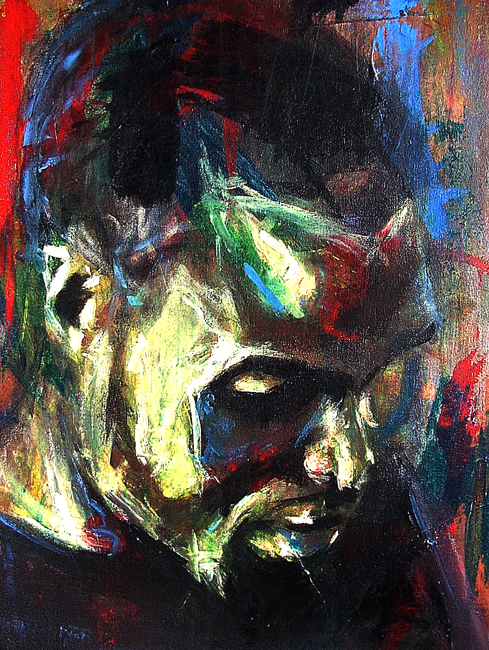 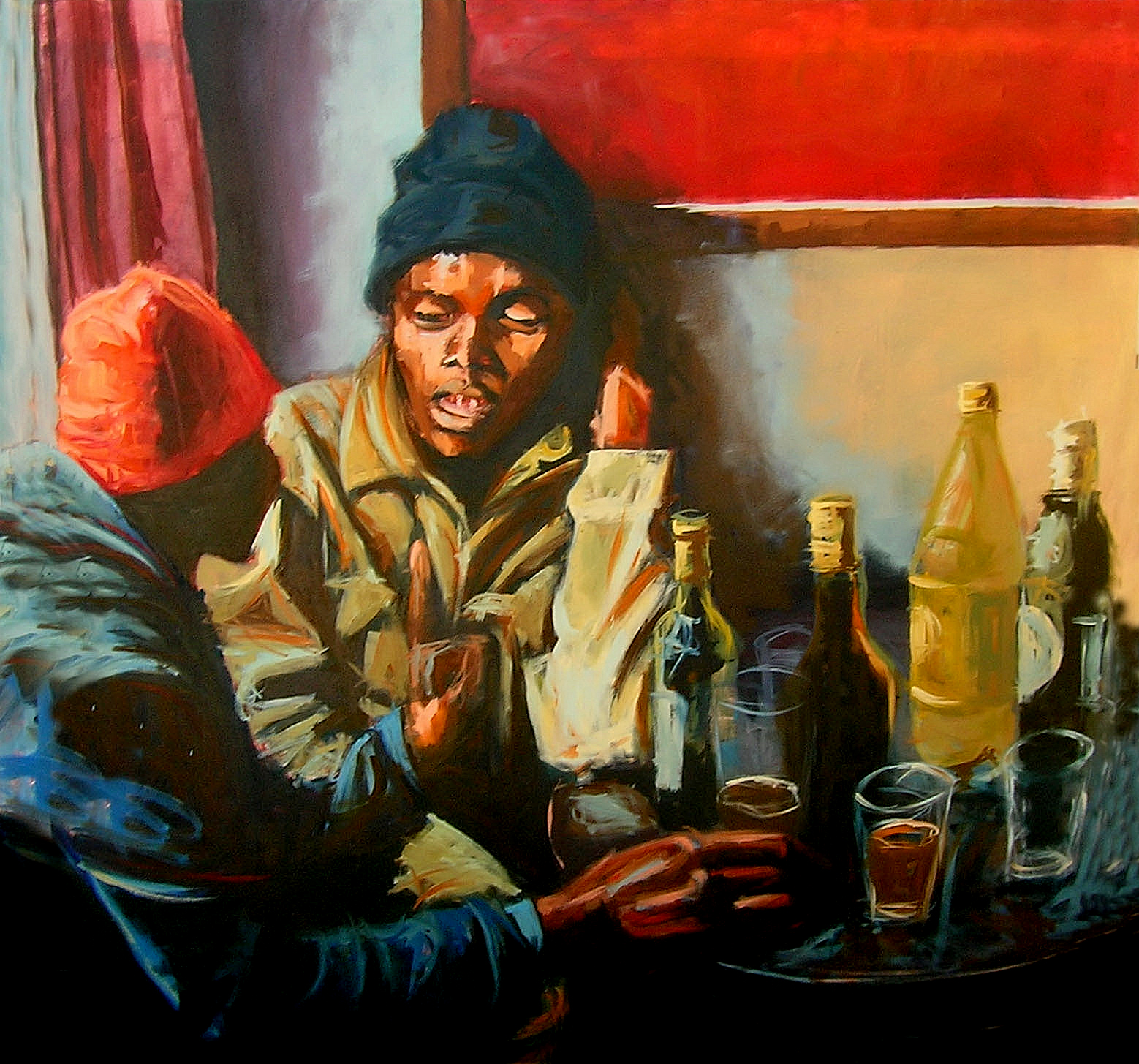 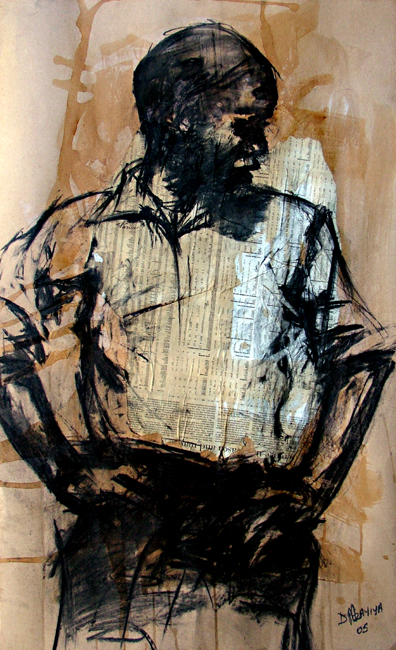 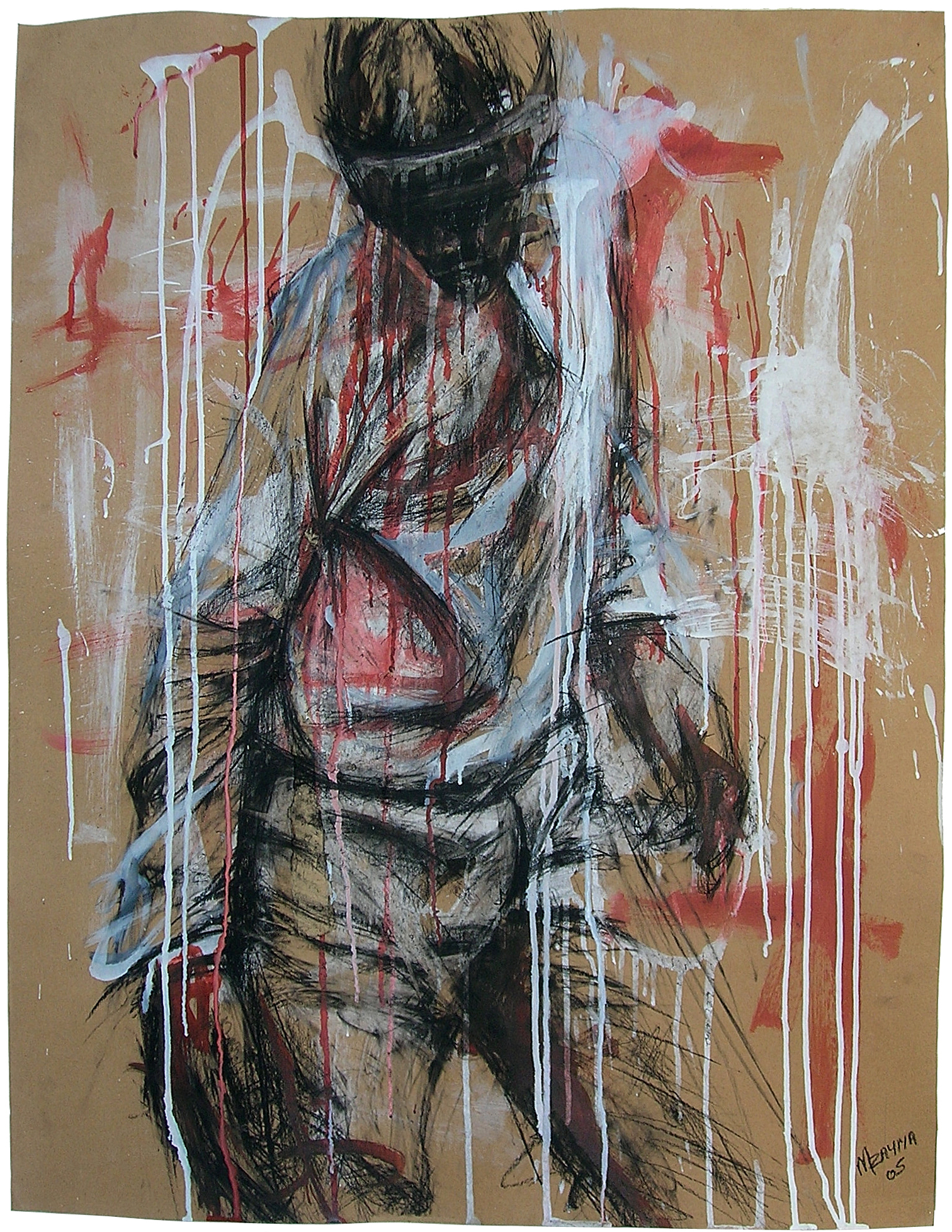 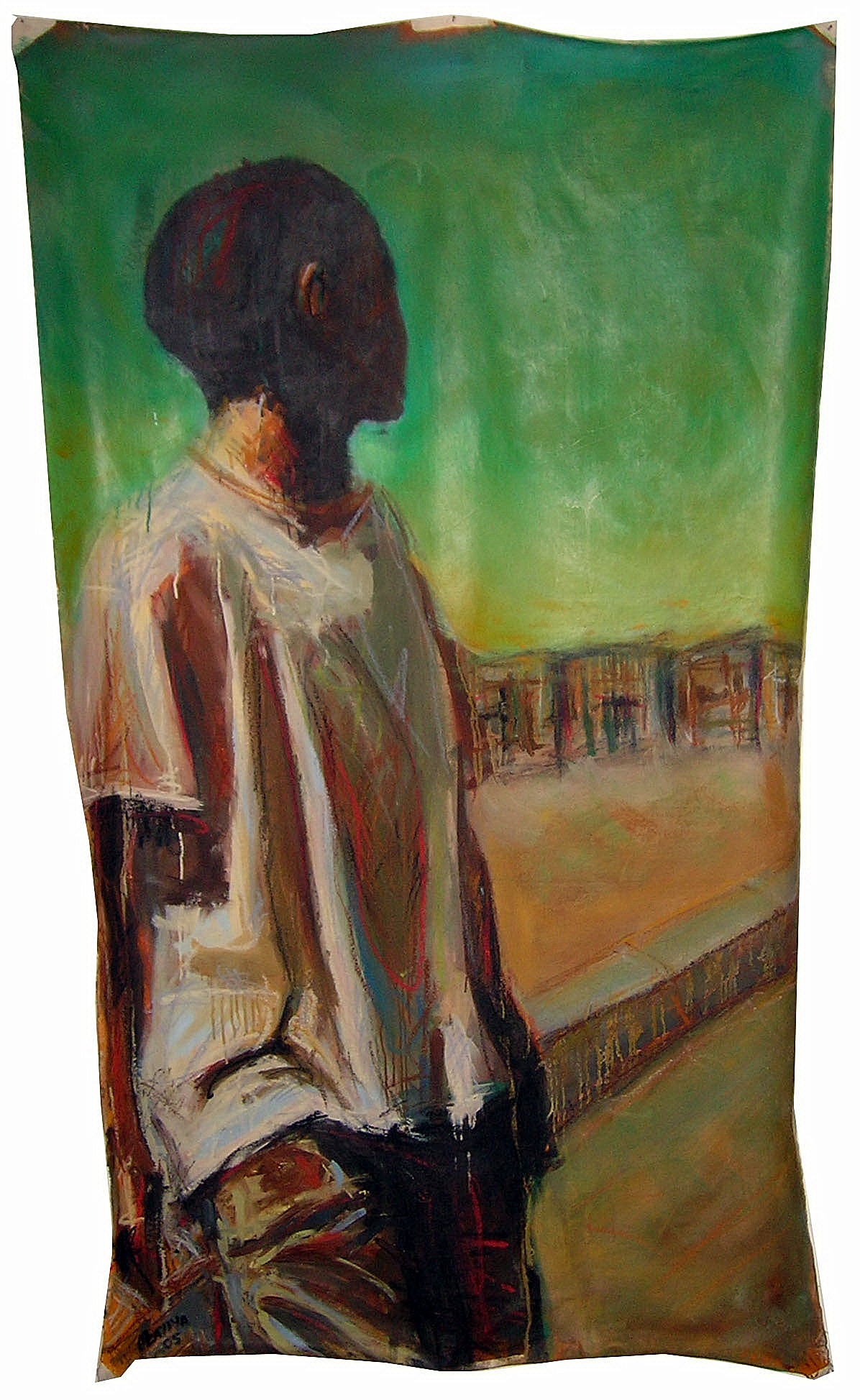 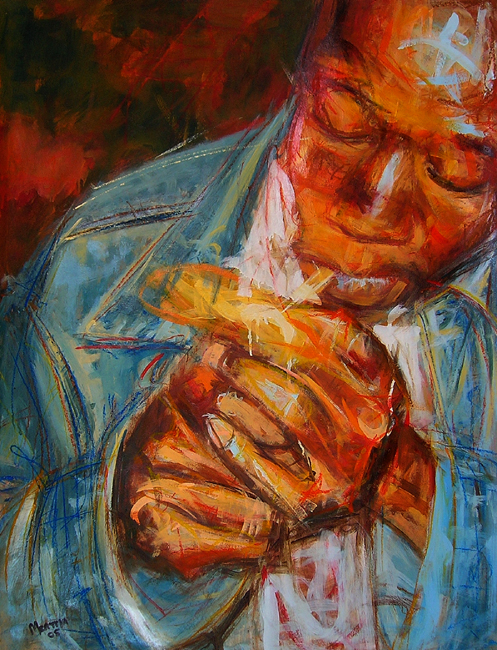 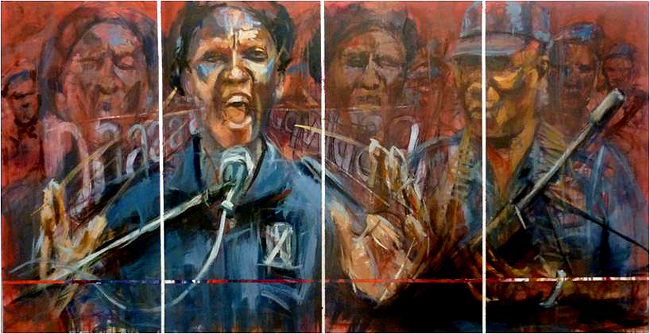 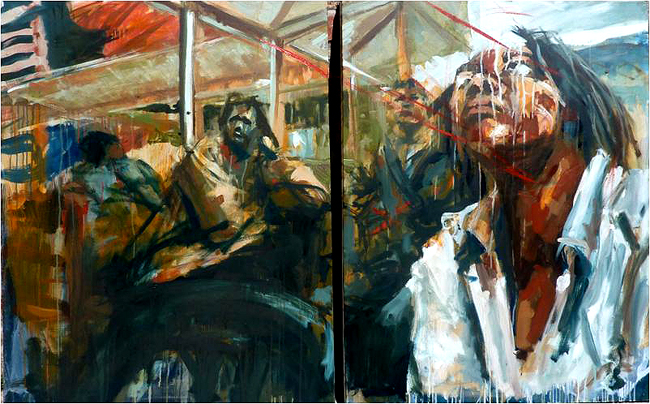 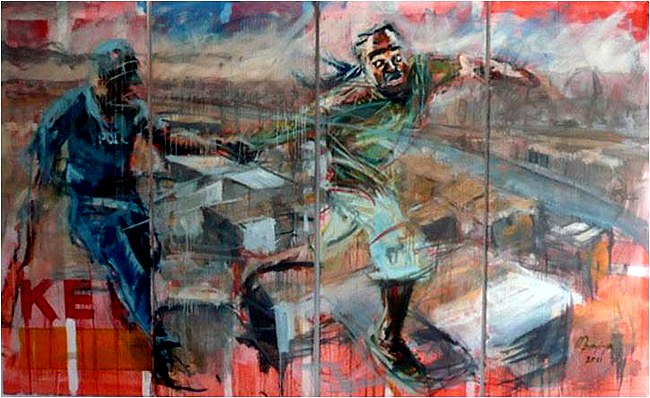 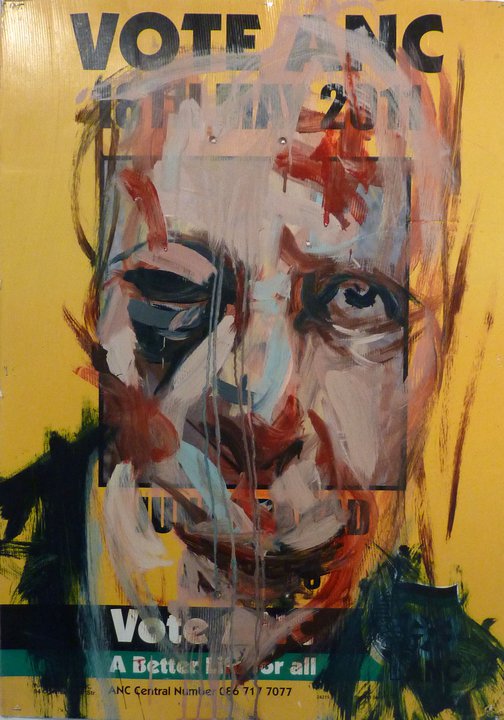 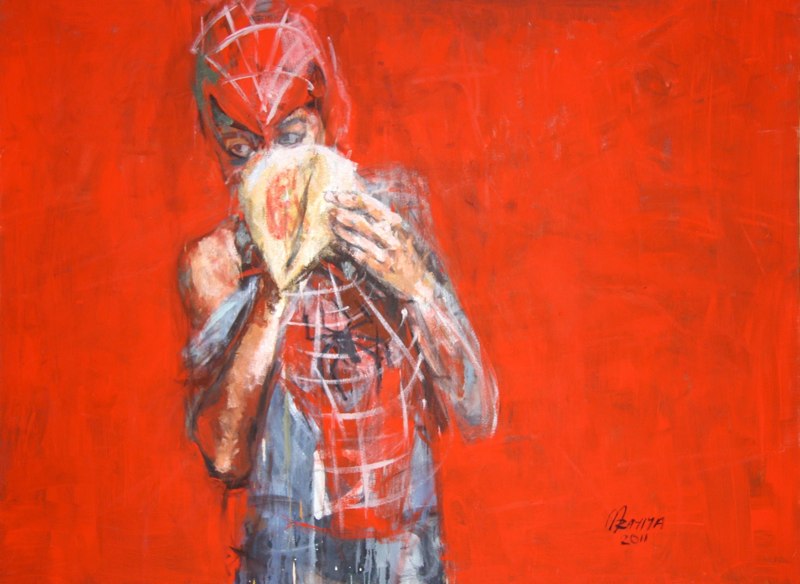 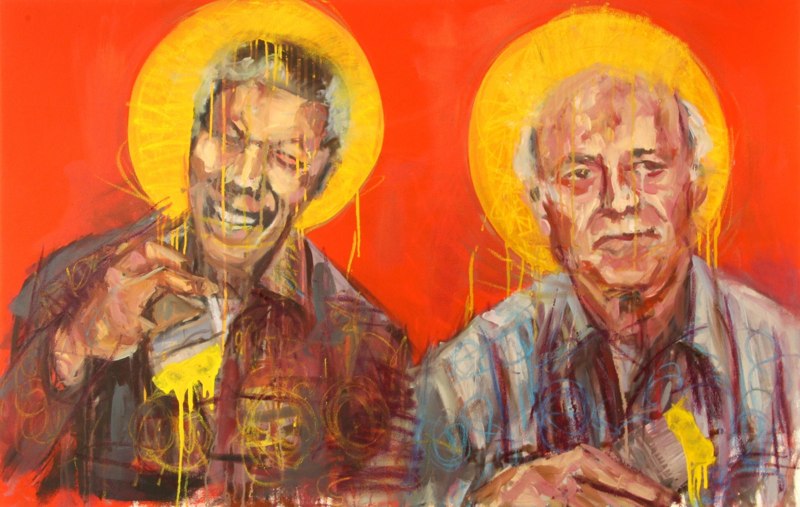 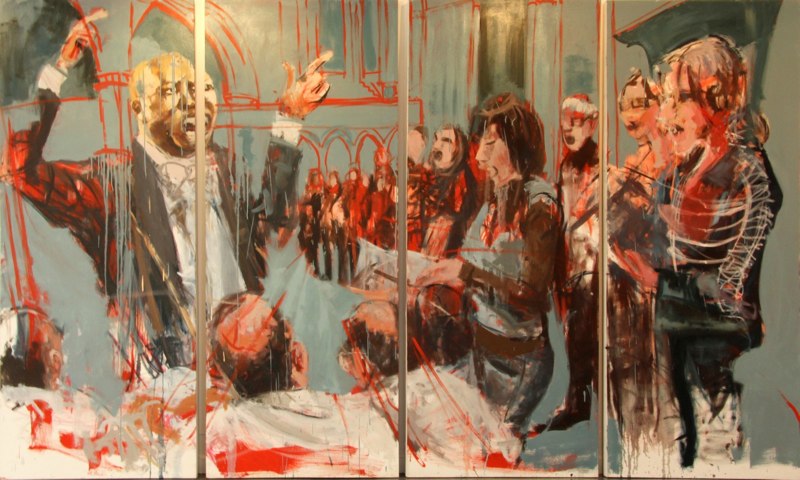 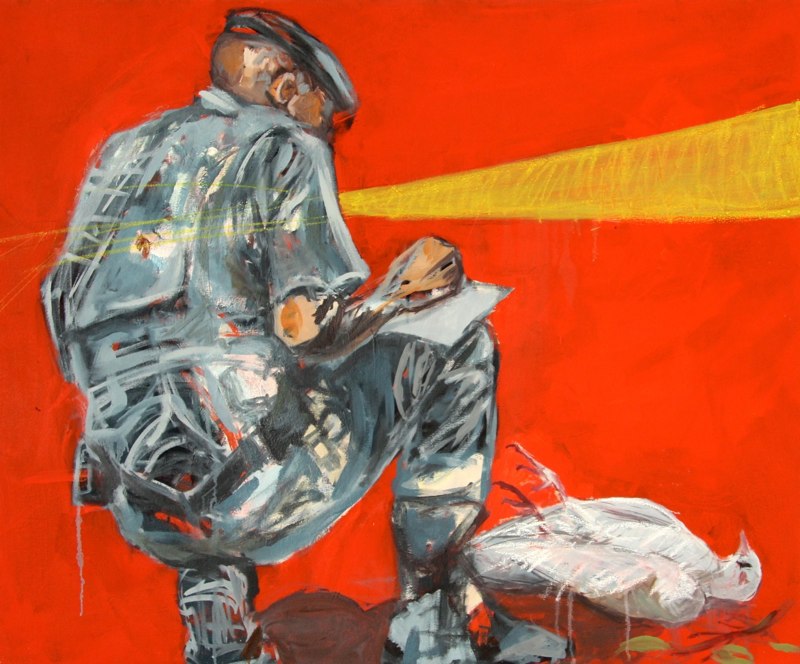 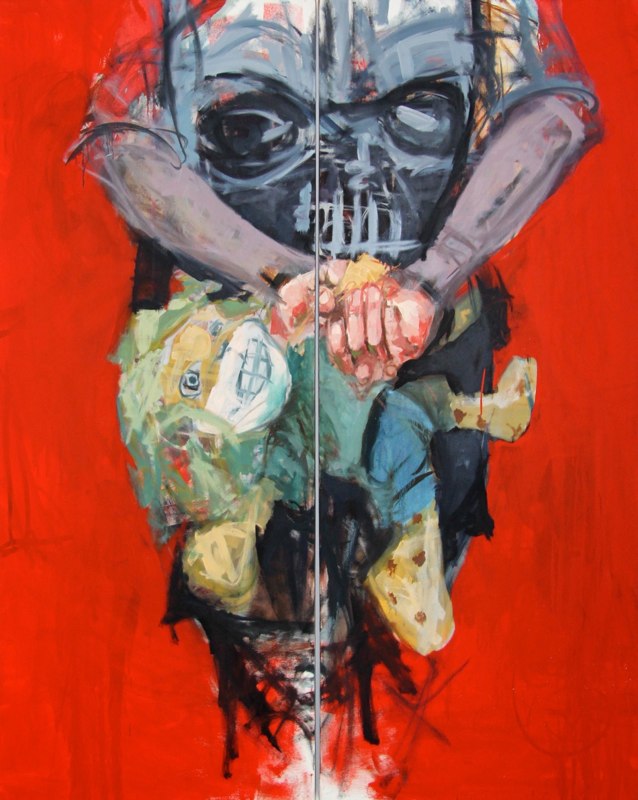 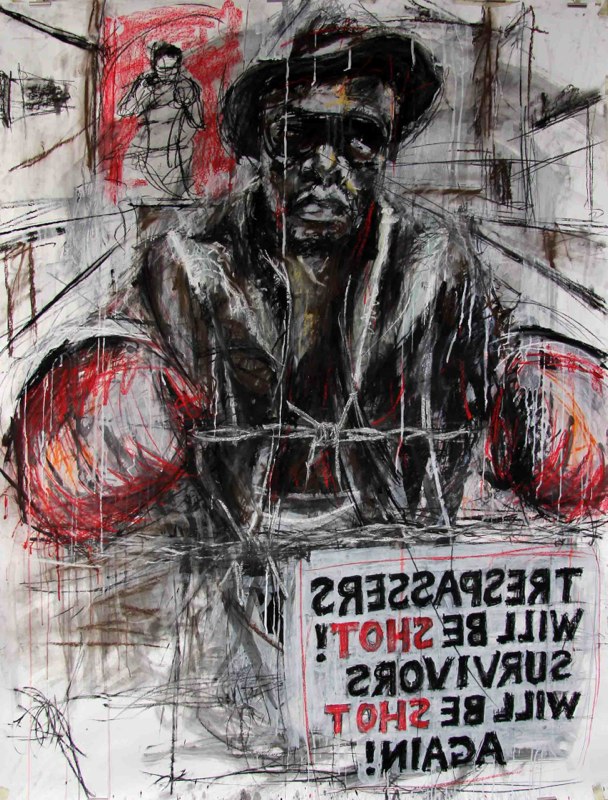 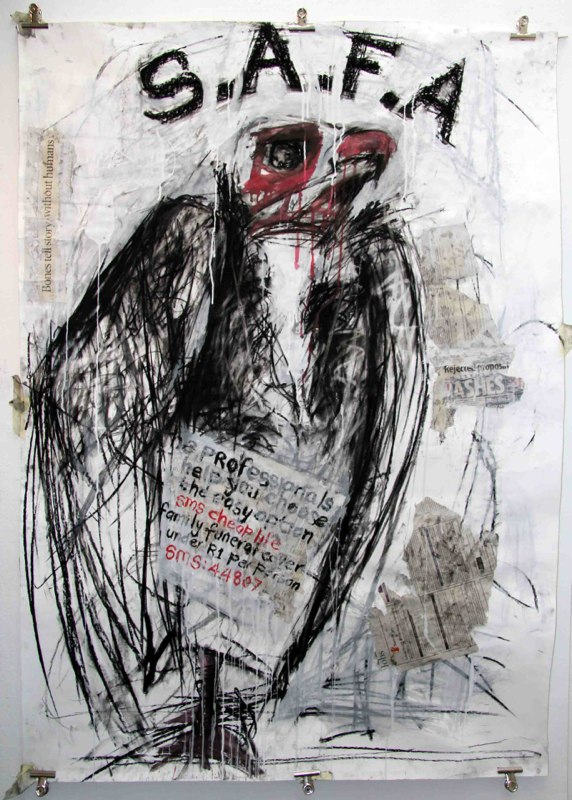 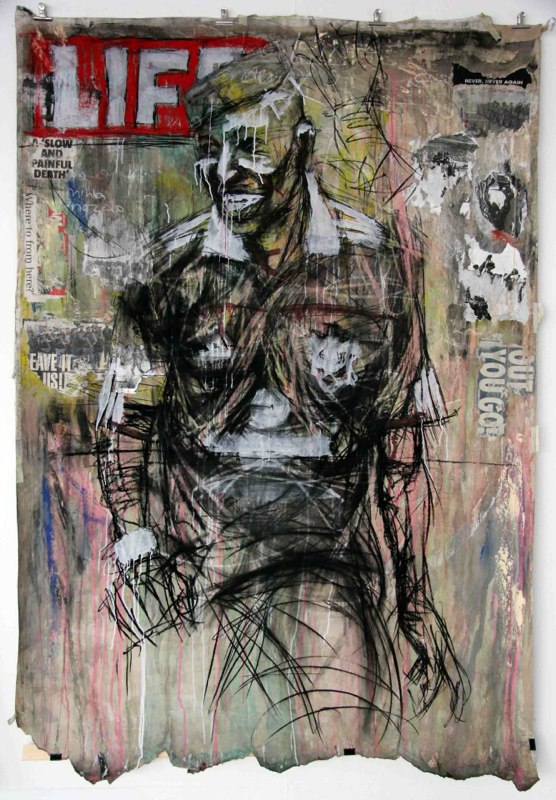 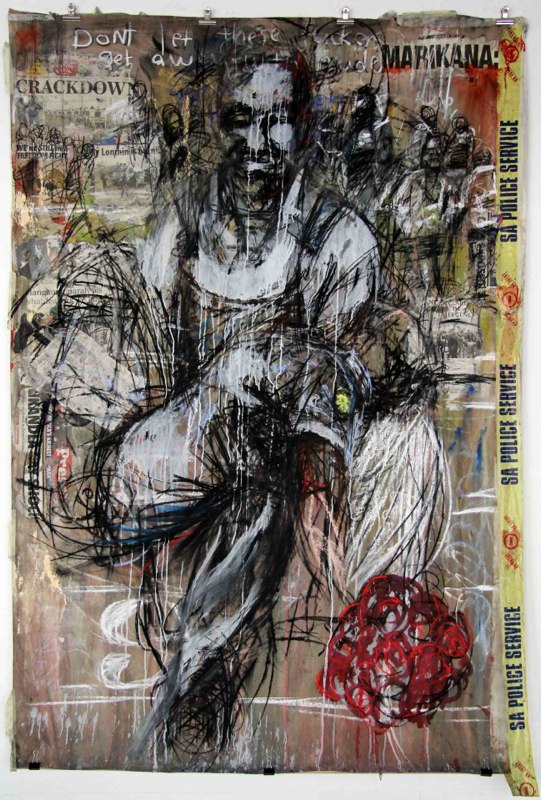 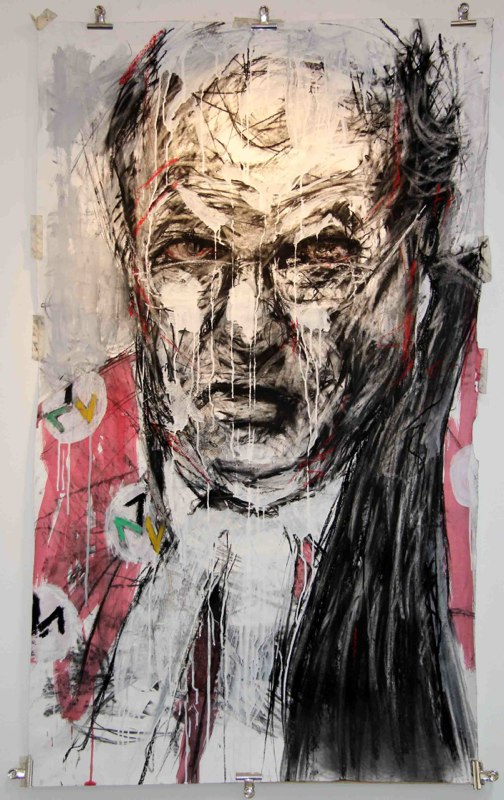 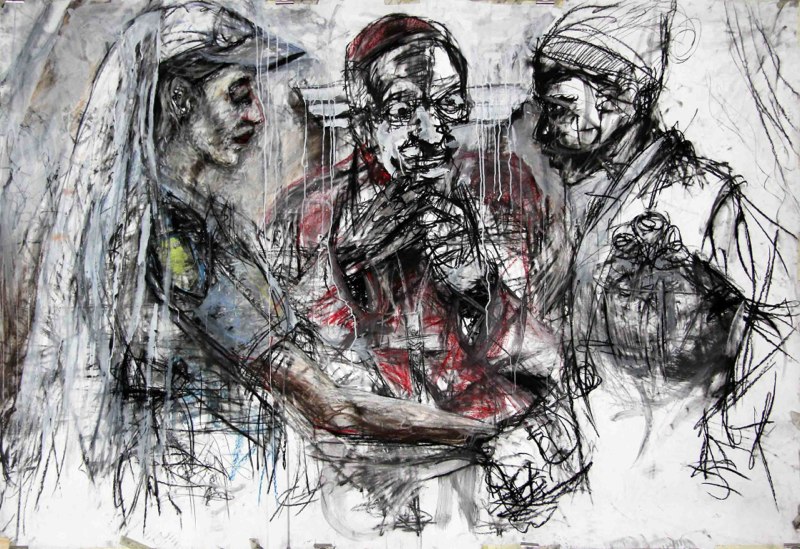 Image: Dathini Mzayiya “Rewinding at the End of the Day II” 2005

Umsi (the smoke) is a group exhibition featuring Lindile Magunya, Ndikhumbule Ngqinambi, Thulani Shuku, Dathini Mzayiya, Lonwabo Kilani, and Vivien Kohler. Inspired by Magunyas “documentation of the ongoing burning of the shacks in his area”; the artists share a “common concern around the housing problems in the Western Cape [and are] questioning the ongoing burning of the informal settlements”. They believe that through coming together they can “voice these social issues louder than an individual can.” The motivation for collective action is also a practical one. The artists, who between them have studied at every local institution accessible them, primarily NGO’s, colleges and workshops, “decided to create our own opportunities [to build] our group career as well as our individual careers [due to] the gap …between galleries and emerging artists, and … the lack of resources for …solo exhibitions” Guided by emerging curator Vuyile Voyiya, who has been mentor to the group, these paintings come from a workshop held last year as well as from works produced subsequently.

Magunya provides the most explicit interpretation of the theme with The Cries and Abandon, which utilises a simple but effective split frame composition. Generally he does a decent job capturing the texture and character of objects but he struggles with resolving the tension between the pictorial representation of debris with the production of sophisticated commodities (art). His solutions: to simulate through paint on canvas the illusion of a torn edge, or to physically severe edges of his board and to present them in black tomato boxes, were perhaps better ideas than results. In particular the sawn edges appear contrived, and he may have been better served by painting on real debris.

Mzayiya, particularly with his two paintings titled Rewinding at the End of the Day, presents a less direct take on the theme by addressing the need for social spaces for dialogue. His larger than life seated figures are wedged into corners and pressed against walls, their shadows emphasising their marginality. He demonstrates both graphic and gestural sensibilities but the overall result is essentially realist in its convincing representation of ordinary people in everyday guise.

Ngqinambi creates an extraordinary interplay between a tightly modelled naturalism, seen primarily in his figures, with his painterly treatment of the natural elements where the boundaries between land and sky are as fluid as the shifts between the evocation of a deep illusory space and the affirmation of a flat painted surface. Consequently his figures occupy a liminal space that communicates a sense of waiting. A series of small paintings highlights the artist’s ability to skilfully evoke epic narratives without resorting to large scale.

Kilani demonstrates an impressive proficiency for drawing. His birds eye perspectives on solitary sweeping men are extremely effective. The contrast of fairly acute illusory space with flat, textured ground is a striking compositional device that establishes a sudden sense of finding oneself on the precipice of a silent excavation. However as a painting the flat ground lacks interest and suggests that it is the second hand repository of an idea, rather than a painterly resolution of the artistic process.

Kohler combines an unusual method of painting in oils on tile grout, with a more orthodox painting technique that constitutes a painterly realism. He incorporates rusted, found objects, generally separating them from the painted areas. A convincing painter he should be wary of concepts that come uncomfortably close to cliché: his visual realisation of roots as rusty being an example.

While most artists reveal strong graphic inclinations Shuku is undisputedly more painter than anything else. His gestures are almost flamboyant, a ‘wild’ emotive style that communicates urgency, chaos, disintegration and fragmentation. He is less successful in his inclusion of small, circular, decorative details, presumably as a contrast to his audacious, explosive brushstrokes, as these come across as superfluous doodles that add little value to his works.

Overall Umsi is a coherent and inspiring group exhibition. It boldly affirms the relevance of painting for an emerging generation who are determined to make their mark as socially concerned and professionally motivated artists.

[All quotes come from artists’ statements accompanying the exhibition.]

NB An edited version of this review appeared in Art South Africa vol 4 no 3, 2006 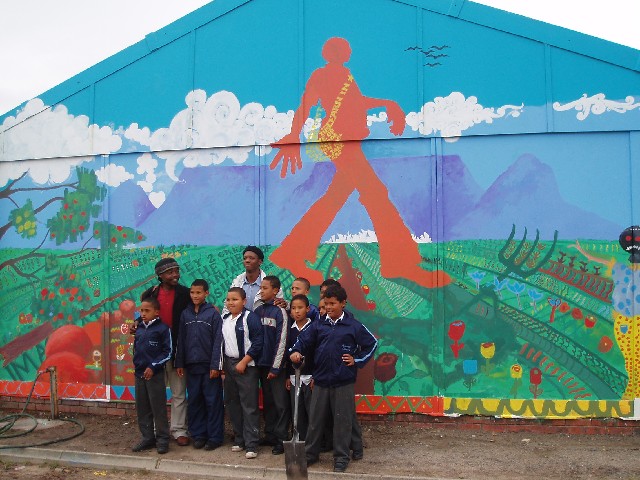 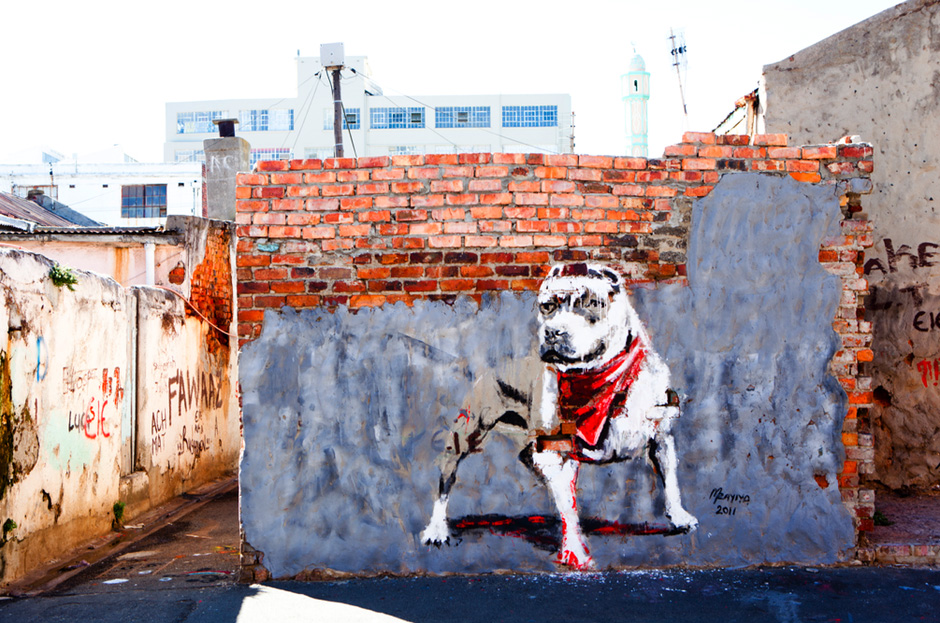 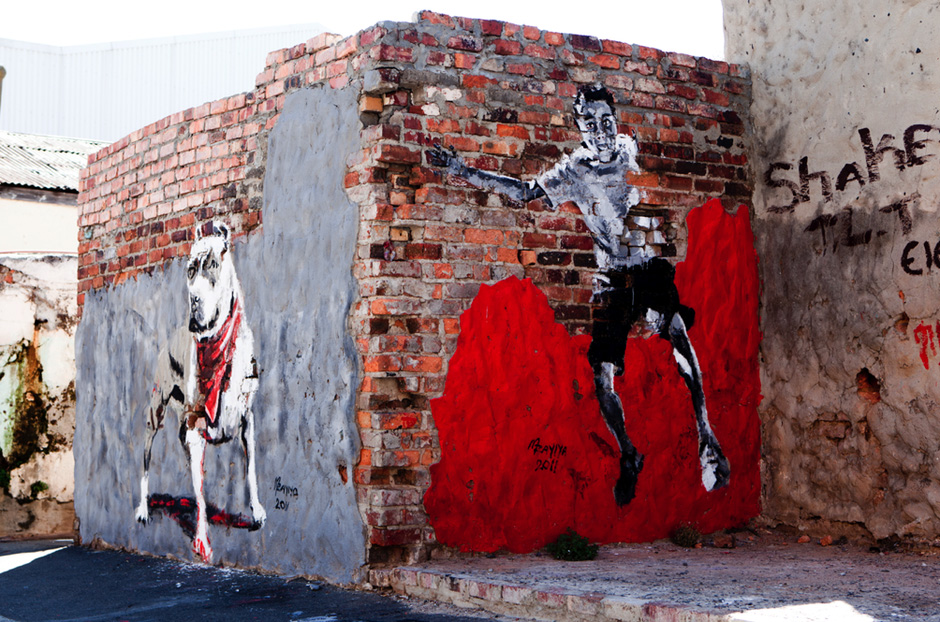 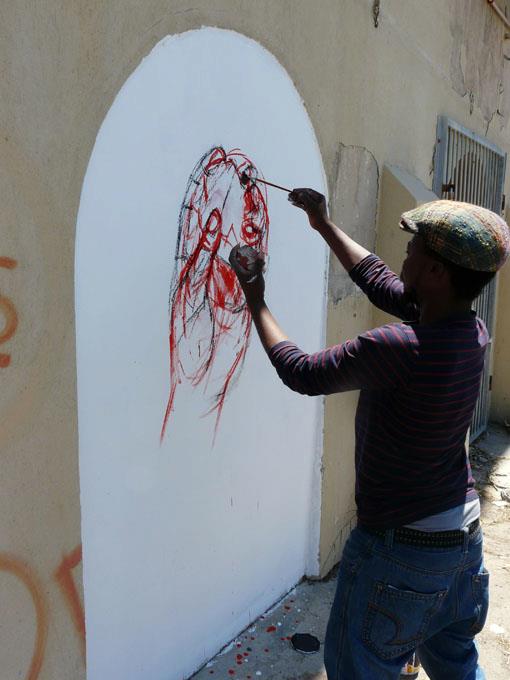