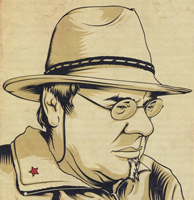 b. 1950, Ladybrand, Free State, South Africa; d. 2010, Cape Town.
Jon Berndt was one of the founders of the Poster Workshop at the Community Arts Project. Best known for his political and educational graphics,  Berndt’s early creative practice was influenced by the Arte Povera movement. His last major project took the form of imagined public art works, where his acute political and graphic sensibilities are amply evident.

Pemba – Painter of the People (click on image below to enlarge)