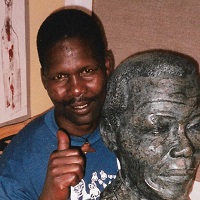 b. 1962, New Brighton, Port Elizabeth, South Africa.
Mpumelelo Melane is a sculptor, who carved wooden figures in his spare time while working in posts as a labourer. After receiving chisels and some career advice from a man called Tom Ungerer in the 1980s, Melane joined Imvaba Association, and later went to Cape Town, where he trained at the Community Arts Project (CAP). Melane’s sculptures are largely portraits and figurative representations of people.