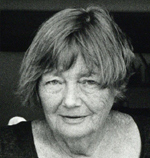 b. 1950, Cape Town, South Africa; lives in Cape Town.
Patricia de Villiers is an artist, illustrator and designer. She has been active as a cultural worker and poster designer since the early 1970s, contributing to community organisations including the Community Arts Project in the 1980s in Cape Town, and the Broadside Workers’ Theatre Company in the UK.

Born nearly in 1950 in Cape Town, to an Afrikaans father and an English mother.

Schooled in numerous places and received an education (of a sort) in fine art at what was then the Johannesburg College of Art, primarily dedicated to the production of ‘commercial artists’, teachers and, above all, industrial designers.

Fled the miseries and artificialities of apartheid in the early 1970’s to study and then practice stage design in London. Drawn by Marxism and Feminism I joined a touring theatre company that made plays ‘with and about’ the trade union movement and drew its inspirational roots from Bertolt Brecht and Kurt Weil as well as the folk tradition of the broadside ballad.

Post 1976, I resolved to return to South Africa, and decided that my most practical contribution to the anti-apartheid struggle was to become a printer. I then learnt the trade (with limited success) at a Cooperative Press where I learned in particular to throw large reams of paper up the stairs. I was also schooled in the politics of the ANC but was finally (I thought shamingly) advised that I was ‘probably most suited to cultural work’.

I returned to Cape Town in the early eighties and soon discovered that the local printing trade did not accommodate white female offset litho machine operators. However, after a period back in theatre with the People’s Space, I was introduced to the Community Arts Project at a serendipitous moment  - just after the Gaborone Arts Festival when the assembled artists poets and performers were buzzing with excitement and resolve.

Joined and remained for 10 years with the Silkscreen Workshop aka Poster Workshop aka Media Project. After a quiet beginning, with the launch of the UDF and thereafter until the end of the decade, the workshop became a production line for hand-printed posters, banners and T-shirts, enthusiastically, if somewhat wildly, produced by youth groups, civics and community organisations of various affiliations. Our efforts to move with the times and become a training centre rather than a ‘service organisation’ never quite took off – the prescience of IBM in showering computers across the liberation movement meant that our methodologies and love of the silkscreen took on a quaint and nostalgic aspect.

After the birth of my daughter (in the nick of time, given my age) I turned to illustration, poster making and cartoon strips for both adults and children. This enjoyable, poorly paid, and, at times, lonely and apparently irrelevant, occupation was followed by an opportunity to work in the newly designed provincial health department. Here I spent 15 years striving to fit my rough round peg into the infinitely square, finely chiseled and intellectually challenging hole that is the health sector.

These days I am busy oiling my rusty artistic cogs with a view to doing, full-time, what I think I do best and certainly love the most – drawing, painting and making things with my hands.