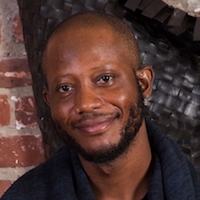 Patrick Bongoy’s sculptural works use discarded materials, such as rubber and industrial packaging, reflecting on the degradation of the earth’s natural resources, and those directly affected by and forced to improvise within this continued destruction and pollution.

My work speaks in response to the global reality of literal and figurative environmental pollution. This encompasses the entire spectrum from the erosion of economic viability for people, socio- cultural decay impacting on community and individual behaviour and natural rural and urban landscape.

I draw on the history of my roots in the Democratic Republic of Congo as well as the irony of contemporary urban degradation masked as development.

Through the recovery of waste materials such as inner tubes from vehicle tyres, industrial packaging and textiles combined with my use of paint and African fabric, I repurpose and reinterpret what others discard. Beyond the intentional recycling element of this process, the visual concepts I explore surface a range of the pertinent issues. Additional sculpted objects are superimposed on these layered backgrounds, which I create as a foundational canvas. This is also a visual referencing of some of the many laborious tasks undertaken by women in my country, in order to make ends meet.

I try to understand how the deterioration of natural and urban settings mirrors the visible rotting, displayed in the behaviour and habits of the population. Deprivation evidently continues to recreate further misery and desperation.

Although my work reflects a kind of beauty, it also describes the destruction of a place and a people where ethical values have been poisoned or fallen away, infecting human morality and dignity. The aftermath of several violent conflicts has created a nightmarish atmosphere where people relive those moments in an extreme state of vulnerability and resignation to this state of affairs.

My painted figures, always in silhouette, with their deformed limbs and precarious stances, twist and turn in such spaces. They evoke a sense of uncontrolled or dynamic movement captured in a disjointed moment, as if their bodies are mid-execution of a questionable act.
However, the internal versus external appearances and perspectives – what is seen in contrast to what is understood, becomes the site of re-imagination and unforeseen possibilities.