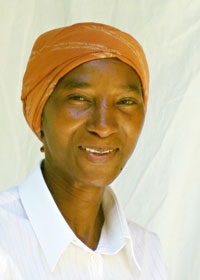 Printmaker, painter and musician, Sophie Peters’ images reflect her personal history, her spiritual connections, and her relationship to the places and times in which she grew up, and continues to live.

A cry from the heart: Sophie Peters

Her days are numbered Sanlam Exhibition

This essay featured in the catalogue for Botaki Exhibition 3: Conversations with Sophie Peters, an exhibition curated by Mario Pissarra for Old Mutual Asset Managers, Cape Town , 2005

Sophie Peters also has work in private collections in South Africa, Europe, the United States of America and Australia.

Sophie Peters has taught art to children since 1987, including at Sakhile Children's Art Project, the Community Arts Project, and the Visual Arts Group in Cape Town.
Share