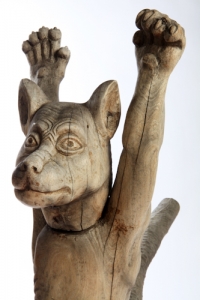 Thami Kiti moved to the informal settlement of Crossroads in the early 1980s, and presently lives in Khayelitsha. Kiti learned to carve at the Community Arts Project. His skilful carvings draw on his rural upbringing and Xhosa identity, and express deep respect for the natural environment and the medium of wood itself.

From the Against the Grain catalogue:

"Thami Kiti's works draw directly on his Xhosa culture, in particular, [the] frequently revisited theme of sacrifice that is associated with most significant ceremonies that mark rites of passage, such as initiation, birth, marriage and death. His strong interest in three-dimensional form and narrative is best seen in references to the [hybrid] female forms that he calls "goat women"... Kiti's "goat women" capture a transformative, liminal moment [that] is accentuated through the representation of movement...The [inclusion] of hybrid figures in Cries of Crossroads introduces the use of animal as metaphor for the human condition, whereas the dramatic interplay between goat and woman in several works [symbolizes] the interdependence between human and animal beings. In Kiti's animal sculptures this inter-relationship is more ambiguously handled..."