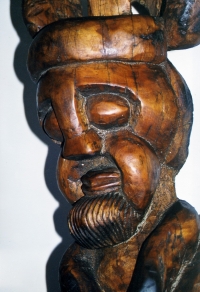 Timothy Mafenuka (1966-2003) was born in Guguletu but raised in Tsomo in the Eastern Cape. He returned to live in Cape Town in 1982, settling soon after in Khayelitsha. Self-taught, Mafenuka’s imaginative art provides an enchanted view of the natural world, expressed through a creative use of materials.

Miracle of the Universe

Miracle of the Universe in the context of African sculpture

There have been sporadic attempts to balance this position, by for example exhibitions at the SANG (Made in Wood: Work from the Western Cape) and in KZN (at DAG & the African Art Centre). However these efforts can be considered only moderately successful, in so far as some of South Africaâs finest wood sculptors continue to languish in the margins, while all of the wood sculptors represented in Tributaries have gone on to enjoy considerable opportunity and success. [1]

Born in Guguletu, Mafenuka spent much of his childhood in the rural village of Tsomo in the Eastern Cape where as a herd boy he carved wooden sticks and spoons. After completing his schooling he moved back to Cape Town (c.1982) to look for work. He worked as a fisherman in Namibia and the Eastern Cape, and as a chef at the Cape Sun. In Khayelitsha he came into contact with other local artists, notably Xolile Mtakatya, and by the early 90s he was working as a full-time artist. In the 90s he participated in several group exhibitions, including those of the Visual Arts Group. No less than five of his early works were selected by the SANG for its Made in Wood exhibition in 1992, and one was purchased for their permanent collection. A genuinely self-taught artist, Mafenukaâs qualities were recognised by the Thupelo Workshop who invited him to attend several regional workshops and one international one.

A dapper dresser with trademark pipe and brimmed hat, Mafenukaâs art differed from most of his contemporaries in that he used unorthodox materials that he often combined with wood (including shells, glass, sand, and rubber). However it was not only his lack of exposure to art education from NGOâs such as CAP, and his choice of materials that set him apart from of his contemporaries. Enchanted by the twin joys of life and the act of creation Mafenuka avoided the dominant themes of poverty and protest. In their place he developed a magical world of the imagination, ably expressed through his evocative imagery, striking use of materials, and (particularly in his prints and paintings) a vibrant use of colour.

As enterprising as he was innovative and resourceful Mafenukaâs lyrical mono-prints and smaller sculptures can still be found in small galleries across the Cape. He was also one of the few âSt Georges Mall artistsâ who took a small shop for himself at the Pan-African Market. In recent years he held two solo shows, unfortunately both at low-key venues (DC Art, Cape Town; and according to his family another in Pietermaritzburg). When he fell ill last year a retrospective exhibition was organised on his behalf at Greatmore Studios.

Mafenukaâs crowning achievement as an artist has never been seen by a wide audience. His forte was wood sculpture, and c. 1992 he produced his first large totemic sculpture. In total he made only six of these. Three of them were bought by private collectors (from the UK, Japan, and Cyprus). Three remain in the collection of the family. The most ambitious of these is âMiracle of the Universeâ which stands at over eight feet tall. That he knew he had created something special is not only evident in the title, but also in the fact that his signature appears no less than three times on the work!

Originally written as a motivation for the purchase of Miracle of the Universe by the South African National Gallery. The motivation was successful.

[1] With the tragic exception of Nelson Mukhuba