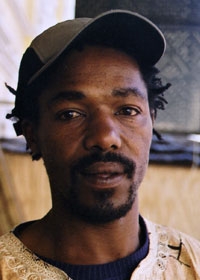 Mtakatya began drawing on the walls while a political detainee in 1986. As a youth activist in the late 80s and early 90s, he ran art and media workshops in his community and taught screen-printing to unemployed mothers, with the Philani Project. He also ran media training workshops for the African National Congress, and was an active member of the Visual Arts Group (1988 - 1993).

(Mtakatya's work is also included in numerous private collections in South Africa, the Netherlands, Germany and the United States of America.)