POSTED ON: April 18, 2018 IN On Artists, Sithembiso Sangweni, Word View

From the days when his explosive visual art exposed the injustices and inhumanity of apartheid, Sfiso Ka-Mkame is maturing with time, but he is still a rebel with a cause. His artistic manifestation and focus is no longer only about South Africa but about Africa, particularly the heroic roles of African women warriors.

In tune with the fluid technological revolution, Ka-Mkame’s art is grabbing attention via social media platforms bringing local and overseas customers knocking at his door in his transformed government subsidy house in Mbomvu street, Nazareth, outside Marianhill. The house is both a studio and home to his family, where he lives with his wife, son and daughter. The lounge is stacked with books he keeps at hand as his great source to find metaphors to tell forgotten heroic stories of African women warriors.

It is a seismic transition from the signature works he is celebrated for when he exploded onto the art scene in 1984. His famous Letters to God and Letters for My Child raised and exposed the pain and suffering apartheid inflicted upon his Clermont community, west of Durban. The transition is a far cry from his silk screen printing days, hassling and unable to have his own bank account because artists were not recognised as formal workers under apartheid’s curtailing laws. His earnings were deposited into his mother’s account. Today social media and his cell-phone act as a warehouse for his colourful stock about the history and heritage of Africa as a continent that he animatedly swears allegiance to.

Though he has unfinished business that he did not switch to oil painting and sculpture by 1994 – a milestone he set for himself after starting full time art in 1984 – he is content and happy where he is as an artist who has persisted and endured the test of time. “I will die using oil pastel now, I am like one with oil pastels. Colour attracts me. I apply yellow, orange, red, up to dark tones. I use a razor blade to tell my story, the blade is my weapon. I scrape, it is like scavenging for hidden beauty. I am using African masks that were used by Africans for ceremonies. They had masks for great harvest and others to appeal to ancestors for when a woman couldn’t bear a child. They will use masks when carrying a child. I am reminded of warrior women from Gambia, Angola and Benin. My art is no longer focusing on South Africa. I have broadened my horizon. It is not going back; it is about learning from my past to go forward.”

Despite his transition, Ka-Mkame still does figurative work that deals with social issues such as women abuse, child pregnancy, virginity testing, and also about love. Though letter writing is no longer an overriding metaphor in his art work, Ka-Mkame remains true to his calling to be an artist reflecting societal issues and changing the human condition. “When we were oppressed; I thought who should we address our grievances to? Who do you write to? I thought about a child who would be born into this situation. Letters for My Child was a letter for an unborn child. I was thinking of the place she/he is coming to.”

Since finding out that masks are powerful symbols that represent Africa, he is on a mission to tell history to develop and advance African pride and identity.“My work deals with celebrating anything African because I am an African and Africa is one.” Women warriors like the Dahomey Amazons and Nzinga of Ndongo and Matamba feature prominently in Ka-Mkame’s artworks. The Dahomey Amazon or N’Nonmiton, meaning our mothers in the Fon language, were an all-female military regiment in Dahomey, an African kingdom between 1600 and 1894 in the area of present-day Republic of Benin. They were named by observers and historians due to their similarity to the semi-mythical Amazons of Ancient Anatolia and the Black Sea. Queen Nzinga of Ndongo of Matamaba fought valiantly and held off Portuguese control of present-day Angola for over 30 years during the early 17th century. His art elevates women warriors whom he views as un-recognised revolutionaries. 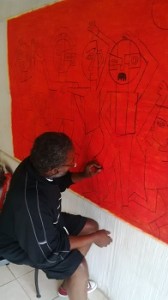 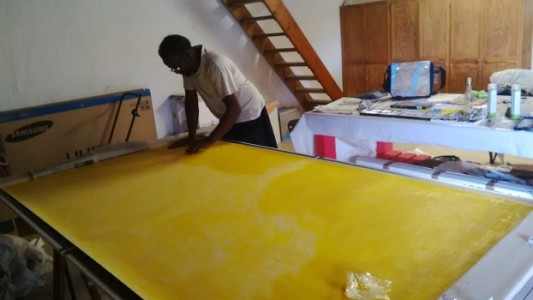 Closer to home, ka-Mkame is currently working on a three-metre-long masterpiece paying homage to Miriam Makeba, whom he extols and admires for putting Africa on the map through music.“She played a huge role to influence musicians like Angelique Kidjo to embrace singing in their own African languages and wherever she lived in Africa she composed and sang songs in local languages. She was Mama Africa, empress of African music,” ka-Mkame chuckles. 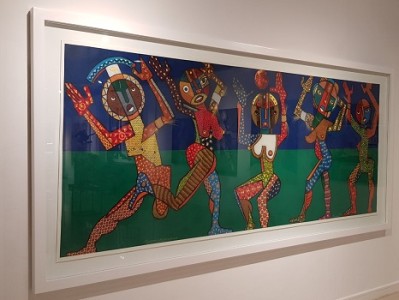 Why has he chosen using masks to tell history and the plight of women? “I am using masks because they are more relevant, people start to be aware of Africa because masks were created to send messages. “If I make a portrait of a person, it represents Africa. My work is not about being nice. I am fighting with a bias for the feminist cause because I was brought up by my mother on her own. My mother was like also my father in one.” That his mother Lizzy Mkame, also a community leader in her own right in those days, raised him and his siblings with an absent father, makes Ka-Mkame respect and acknowledge women through his art.“My father did not contribute anything. I had no maternal uncles. My mother had three sisters. I was surrounded and brought up by women. I had no male role models. My maternal uncle died in 1963 when I was born. This is the reason I empathise with women in my art using masks. I know what women go through and went through. They used to be oppressed and ill-treated by men and it was normal that they were treated like that.”

It is this unwavering stance that defines Ka-Mkame as an unapologetic rebel with a cause who resists being told what to project in his art or to work within predetermined themes. “I do not do paper sketches, I just attack the paper as is. I work with something that comes to me. If you want me to work to a theme, I don’t commit myself. I don’t ascribe to preconceived ideas. It should be something I see on paper. Once I put colours. I see images I help to create. I don’t want to be stuck. I want to be free. I assist what I see on paper come to life.”

Though creatively still very much in charge of his destiny, laced with a no retreat, no surrender attitude, ka-Mkame feels that the more things change the more they remain the same.It is more difficult if not harder today. “Gallery owners and people who write books about art are still white people. If there are overseas exhibitions, it is still the same people who represent South Africa. This is despite that we have a pool of Black artists. Whites are still in control and dominant. When you price your work, gallery owners tell you it is not worth the price. You end up being excluded whereas some young white artists sell theirs for a fortune.” It pains him that the late Durant Sihlali’s art work remains undervalued because people who have buying power for art remains white people, despite many Black people having disposable income post-apartheid.

Continued control of galleries and exhibition spaces by white people does not make ka-Mkame absolve Black people for their lack of art appreciation because they are obsessed with material things. He is grumpy that Black people with disposable income are not collecting art though not entirely discounting that art education is still lacking in Black communities. “Black people, some of whom I know and grew up with, who are in high paying jobs and positions, avoid buying art despite that it will have far more value in future. They rather buy you expensive liquor just to show off.” He is disappointed s that lack of art collection and appreciation is prevalent in KwaZulu-Natal, his hometown, compared to Cape Town and Johannesburg.

Despite the odds Ka-Mkame prides himself that he is still a social commentator for the people and continues to tackle issues affecting the human condition. The difference is that today Ka-Mkame tells stories using new motifs versus his yesteryear direct approach through silk screen printing exposing apartheid as a polecat and evil that it was. That his June 16 T-shirt got his niece Smiley detained, leading her to spend her 16th birthday in jail on June 16, 1987, is a poignant reminder how his art irked the apartheid rulers under a continuous state of emergency. The same T-shirt got one of his bosom friends Musa Ndwandwe picked up by overzealous police the following day and released a day later, after a spending a night in custody. “I felt it should have been me who should have been arrested. Smiley was very young. I felt very bad that I was responsible for her arrest. Why didn’t they come to me? But she was brave, township children were used to being teargassed and harassed by police and soldiers.”

His meteoric rise against apartheid and oppression is underscored by the fact that he takes it upon himself to discover things for himself. “I am mostly self-taught. I like to read a lot. The same message still carries on but I am using masks. As one grows and learns that Africa was once one, I am an African. I can’t differentiate myself from the rest of the continent.”

Ka-Mkame has risen like a Phoenix out of apartheid ashes to become a present-day enigma and giant. After being deprived of art education, his accomplices were none other than two former Technikon Natal lecturers – John Roome and Jan Jordaan. They allowed him and others to attend secret art classes at the then whites-only institution. “Roome and Jordaan used to sneak us through the back door at Technikon Natal on Saturdays in Smith Street because black students were not allowed to study there in 1982. They taught us print-making. It made us feel great because we were learning a new skill. At Abangani Open School, I used a spoon to do woodcut. They did not have a printing press. While I was at Abangani, Roome and Jordaan used to come. They were friends with Joe Ndlovu who was in charge at our school. They invited a few of us to come on Saturdays to the then Technikon Natal campus. We would sneak in and the black security guards did not bother us because we came with white people who were duck-tails riding motor bikes.”

Ka-Mkame ‘s talent caught the attention of another discerning Technikon lecturer Barry Maritz, who instantly liked his work and gave him wood blocks. “I was used to working in pastel. He felt it would be something special if done on woodblocks.There were no ‘darkies’ doing that. He gave us a free reign to do as we wished and periodically checked us and commented here and there.”

His illegal activities in breaching the apartheid education system, aided and abetted by perceptive white lecturers, saw Ka-Mkame being recruited to teach art at the Community Arts Workshop (CAW). “When they formed CAW, I was attending art classes at Diakonia. It was under the Institute for Race Relations where Jo Thorpe was struggling with funding. It was decided to move Abangani Open School to CAW as there were no funds to run it at Diakonia. The students were happy to move there, but me and Zandile Zulu resisted the move till the place was closed down. Then we went our separate ways. After that I got called to teach printing at CAW.”

Today the gods of art and creative angels smile on Ka-Mkame, with his works fetching respectable prices, allowing him to focus on his development as an artist.