Going for a Wrong? Hell, it don’t matter

One of the functions traditionally performed by auction houses is the authentification of works of art. Art historians usually stop short of selling themselves as connoisseurs, but in the auction business the sales person claiming the mantle of expert is essential to establish authority, and secure ‘value’. So, along with formal attire we have special protocols and language that includes exotic (French) terms like “provenance”, which translates into something not unlike the pedigree certificate you can expect from the Miniature Doberman Society.

In the art-world the status of the auction houses is just one floor below God’s Loft, the directors of these institutions occupy the same elevated level as the canonizing cardinals of the Vatican. However, while these mercenaries of the art market promiscuously purchase the participation of professors to prop them up, it is really their ability to break sales records that confers ‘greatness’ – Irma Stern becomes South Africa’s most important artist not because she is so startlingly brilliant but because she has the most exclusive client base. It becomes commonplace that at every auction, hitherto obscure items are declared to be “major” works of art. A dodgy Irma Stern seascape is major, perhaps because most South African seascapes are the works of ‘amateurs’, and a bowl of flowers by her that looks like a wishful Van Gogh is major, because they say so.

So if maintaining the aura of unquestionable authority is paramount to selling art at high prices, what would you expect an auctioneer to do if, during the process of bidding, the artist interjects to say that a work attributed to them is not theirs?

This happened recently at Stephan Welz & Co, during the sale of the late Peter Clarke’s collection of works by fellow artists. George Hallett, whose presence had been acknowledged by the auctioneer, Anton Welz, interrupted proceedings to insist that a portrait of Clarke from the 1960s was not by his hand.

Well, what did Welz do? First, he checked that he had heard correctly. Then, ignoring the quiet chuckling by some of those present, he proceeded with business as usual. The most determined bidder was on the phone. I wondered if they were told: “Mr Hallett is here, and he says the work is not his”, and whether they had replied: “What does he know?”

The work eventually sold for R11,000.00 almost twice where the bidding began.

I later asked Mr Welz if bidders had been informed that the authenticity of the work had been challenged by its purported producer. He assured me that the one telephone bidder would have heard the “announcement”, and since this collector can surely afford a hearing aid I can only assume that he is correct.

After the auction I realized that the photograph under discussion had been prominently displayed in the catalogue. In fact, it was spread over two pages, the signal image used to promote the sale of Clarke’s collection. I also learned that the source of the attribution to Hallett was Clarke himself, who identified the photographer on its reverse side. Since there is no reason to doubt that the inscription is genuine, it could be argued that the sale was made in good faith. A few people I spoke to raised the question whether it was reasonable to expect a photographer to recognize every image of theirs, not least one from almost 50 years ago.

Hallett is adamant that the work is not his. Apart from questions of composition and style, the portrait of Clarke is not signed, unlike most, but notably not all, of the twelve undisputed Hallett’s on the auction. Hallett is meticulous with recording his work, and he is currently busy with his 1960s archive. Now if none of this qualifies him as an authority on his own work, what qualifies anyone else?

Continuing with sale, after the disavowal of authorship, raises two important questions. Are there circumstances in which an artist should not be accepted as the foremost authority on their own work? And if authenticity is contested, does the auction house need to ensure that this information is known by potential clients?

One curator I spoke to thought the lot should have been withdrawn pending further investigation, and I’d be inclined to support that view. But, and here my cynicism returns, when we are performing in the domain where the doctrine of willing buyer and willing seller is king, what else could possibly matter more than clinching a deal?

Pre-publicity had claimed that Peter Clarke was being (note caps) “Remembered”. A commercial event was being dressed up as a Memorial. But while these honorable people are pretending they’re in the Bereavement Business I won’t be asking them to officiate at my funeral – hell, who knows, it may not be me they are burying. 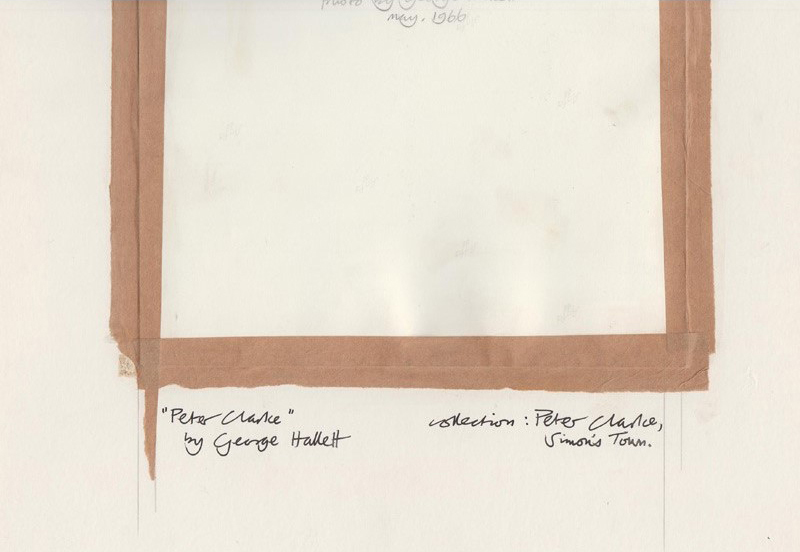