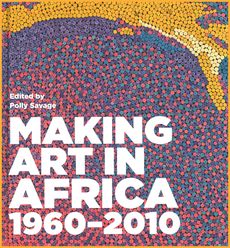 Making Art in Africa is an important contribution to the development of an African art history. It deserves this accolade because of its centering of the voices of artists on the African continent. But it is also a book that takes a bit of work to clarify its purpose, and it is only once this is done that its value becomes evident.

Any publication that takes the kind of title this one does will provoke a necessary, if somewhat predictable response. The title sets up the expectation of the book being a representative, historical survey. Such projects inevitably solicit responses that centre on perceptions of whether the ‘right’ artists have been selected. At a glance, the inclusion of canonical artists such as John Muafangejo and Malangatana suggests that a historic perspective is indeed at play. But there are few of their celebrated peers present, which means that anyone looking for an authoritative, historical overview may be disappointed.

A closer look reveals the hand of Robert Loder, an important and influential patron of art in Africa (and beyond), without whose support many of the artist led workshops organized within the Triangle Artists Network would never have been established. Loder is an enigmatic figure in the history of art in Africa. Seemingly reticent to take central stage, or even acknowledgment for his contribution to art and artists, Loders’s projects are sometimes frustrating in their attempts to camouflage his hand. Arguably, this is less so in Making Art in Africa, where he contributes an essay reflecting on his involvement with art and artists on the continent.

However, if, like me, you don’t usually read an art book from the beginning to the end, but hop around, scanning the content and looking at most the pictures before you actually settle down to read any of the essays, then it might take you a little while to make sense of this book. For instance, someone reasonably familiar with the Triangle Network should quickly pick up that many of the artists featured are associated with it. But chances are that even such a reader may be confused at the inclusion of Penny Siopis, William Kentridge, Robert Hodgins, and Jane Alexander, artists that few would identify with the Triangle Network. Indeed, their inclusion may well set up the expectation of seeing other established South African artists with whom they are more commonly associated. This creates grounds for confusion.

But the simple explanation for the inclusion of Siopis et al is that, at one point or another, their paths have crossed that of Loder’s. With Siopis, I happen to have been a visitor at the Gasworks Studios in London (the organizational epicenter of the Triangle Network), when she was resident there. At that same time, Alexander was exhibiting work produced during a recent residency. Kentridge studied with Bill Ainslie, another important figure in the Triangle story (notably through his cofounding of the Thupelo Workshop). Hodgins is pictured seated on a couch at The Bag Factory, implying another historical connection.

The point here is that what sometimes appear to be odd choices (or exclusions) all begin to make sense when one realizes that Making Art in Africa is, at its core, a book documenting artists and artworks featured in Robert Loder’s collection. That little of his collection dates back to 1960 highlights the muddled conceptualization of the book, sitting between being not quite a historical survey and a reticent record of a private collection (no collections are identified in captions, you just have to work it out). That something approaching a forensic analysis has to take place constitutes an unnecessary distraction that could have been avoided by, for example, dropping the dates in the title and using a sub-title to acknowledge the scope of art as being drawn from a private collection.

Once the nature of the project becomes clearer, then its many strengths begin to emerge. Principal among these is the foregrounding of the voices of an expansive and eclectic range of artists. Drawing on seventy interviews (conducted mostly by Polly Savage, but also notably by Elsbeth Court), Making Art in Africa provides a refreshing alternative to most other books on contemporary African art practice. Indeed, most of the available literature makes scant use of the voice of artists with curators and/or academics speaking for the producers of art. And some survey projects (think, for example, The Short Century) have absolutely nothing to say about the artworks featured. So here we have not only an alternative model, but also an immensely useful resource, not least because many of the featured artists have seldom been documented in the form of published interviews.

A further strength is that it is immensely satisfying to encounter a survey that is built around Africans living on the continent (and not in the USA and Europe). Another virtue of the book, to my mind, is Loder’s individualism. He is not shy to make his own choices, and does not take his cue from MoMA, the Tate, Documenta, or any other Goliath of the Eurocentric Art World.

Also worth singling out is the introductory essay by John Picton, who highlights the diversity and modernity of the featured art. By introducing the little known story of how the first historical study of the Yoruba, authored by an African (Rev. Samuel Johnson), was ‘lost’ for 22 years, Picton introduces the question of what an African art history would look like if African agency had been central to its creation. While Making Art In Africa is conceptualized from a European base, by foregrounding a host of African voices it goes some way towards addressing a very lopsided situation.

A last point, I’m often skeptical about ‘doorstopper’ books, which sometimes have more to say about the resources at hand and the ego of their author than about art. But there can be no doubt that Loder’s expansive collection (of which this is only a select part) deserves a big stage, and the space allocated to each artist provides a suitably dignified tribute from the patron to the artists he so evidently admires. The quality of reproductions, attention to detail in the editing, and not least the range and quality of artists featured, well justifies this book jostling for visibility on shelves dominated by a handful of interlocutors who could do well in learning some humility from the honorable Robert Loder.