This text was originally published on Hartzenberg’s page on asai.co.za in October 2014

Randolph Hartzenberg has worked most of his professional life as an educator. For several years, he taught art at Alexander Sinton High School in Athlone and later lectured in design at the Cape Peninsula University of Technology. Alongside his work as an educator, Hartzenberg has produced a rich body of artworks. He first attracted attention for his work as a painter, notably Domestic Baggage (1994), and later received some attention for his printmaking (Map of the Neighbourhood (1996)). In more recent years, there has been increased interest in his performances and installations. For the latter, there is typically a strong sculptural element, although these pieces tend to be categorised as installations because most make use of found materials and are produced for specific locale, usually in response to invitations from curators.

In my capacity as curator, I invited Hartzenberg to create two sculptural installations for themed group shows in 2007 — ReCenter at Lookout Hill, Khayelitsha and africa south at the Association for Visual Art (AVA). During public walkabouts for these exhibitions, it was apparent that Hartzenberg’s pieces — Base Load Profile and Untitled, respectively — perplexed visitors, a response that gave me cause to reflect on how the least elaborate objects on show could be the most perplexing.

These works, I argue, are deceptively formalist. One resembles minimal art; the other, a found object. But neither of these works are self-referential — they do not begin and end as sculptures in conversation with themselves. Instead, both works prompt reflection on questions of power that extend well beyond their identity as objects of art. In particular, both pieces provoke questions about the deceptive mundanity of the everyday, revealing the normative to bean articulation of social, cultural, economic and political power. And then, having unsettled your day, they desert you on the precipice of agency… Getting to grips with these sculptures requires, in the first instance, close inspection of their form, as it is what the artist presents that provides the key to unlocking layered, open-ended readings.

Base Load Profile is a floor piece. It takes the form of a metal, box-like structure, with a metal bar attached to it. The box is constructed from six rectangular metal plates. The flatness of the surface of the box is interrupted by narrow, straight, low-lying ridges that delineate the edges, and which are repeated as a line that crosses the box, effectively dividing all panels into two, equal parts. The extended bar occupies more horizontal space than the box, being approximately five times its length. At the point that these strips join they overlap, disturbing but not breaking the impression of continuity of the horizontal line, (technically two adjacent lines). The outermost end of the bar is bolted to its base, a board that rests directly on the floor. [1] At its other end, the horizontality of the metal bar is broken by an abrupt, forty-five degree diagonal that connects it to the central point on the side of the box. 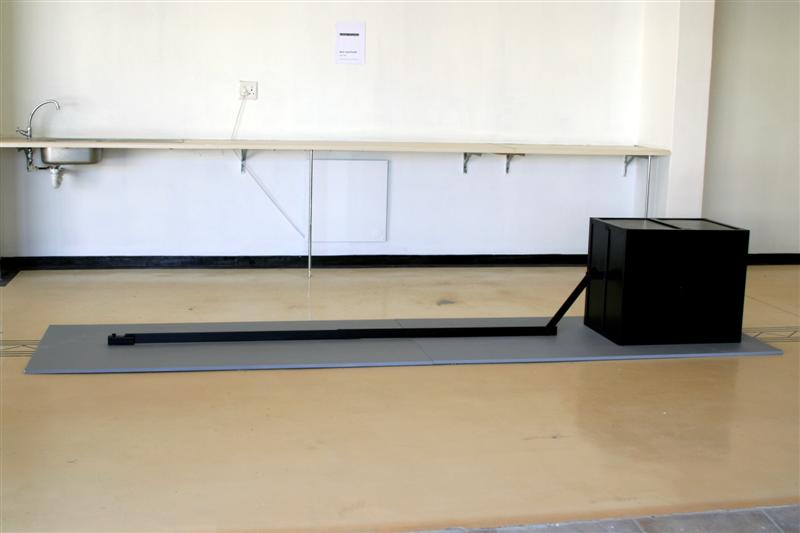 From this description, it is clear that the form of the sculpture is minimalist. There is an emphasis on order, on the crisp definition of shapes. Excessive detail is eliminated. But there is also an understated sense of drama, evident in contrasts between the black sculpture and the white cube in which it is placed, and between the voluminous box and its slender extension. Presence and absence also are visualised as contrasts — if the box defines a closed, physical mass, the line evokes an open, limitless void. The short, diagonal ascent/descent between box and bar introduces a dynamism that is countered by the fixed and closed ends of the piece. There are several elements that draw attention to ideas of the centre, such as the point where box and extension meet, the joint between two identical strips of metal that makes one horizontal line and the narrow, raised ridges that divide the panels of the box into two equal halves. But there are those elements that remind us that symmetry and equivalence are not always the same. We notice that the box is not a square; its verticality is greater than its horizontality. 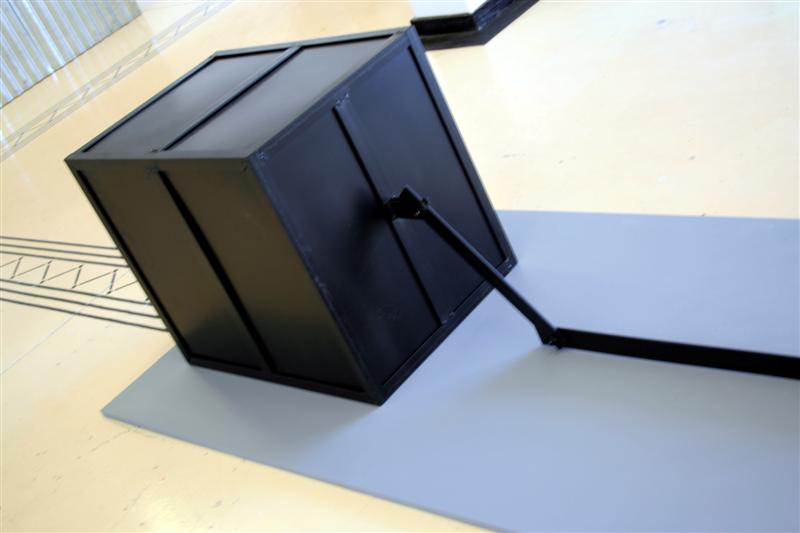 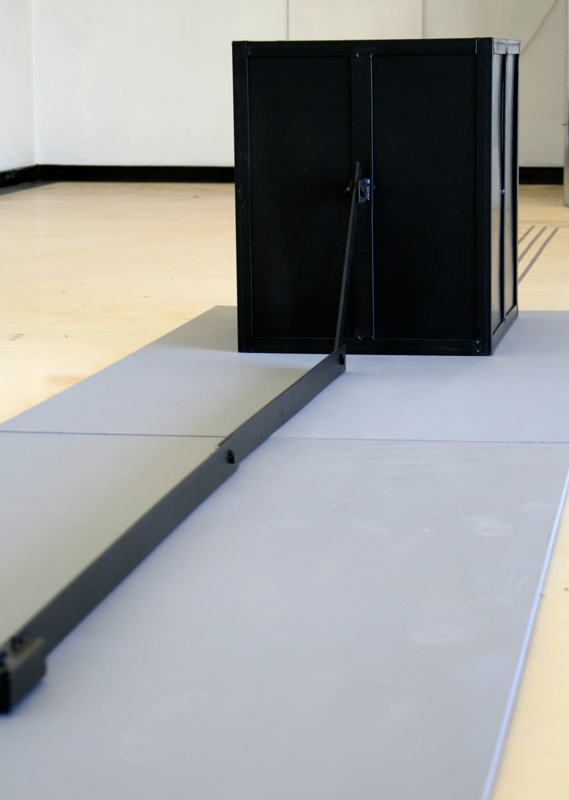 If we consider the other element provided by the artist — the title — then we are alerted to questions of intent on his part. ‘Base load’ suggests a concern with bearing weight, while ‘profile’ suggests that we are presented with an outline, survey or contour. Taken together, the title intimates a visual representation that in its clinical, impersonal language and form assumes the qualities of a diagram or illustration, introducing a didactic dimension that is somewhat at odds with the abstract, ‘non-representational’ form of the sculpture.

Here it is necessary to introduce more detail of the curatorial brief, as this work was not produced on its own terms for display in an unspecified location. ReCenter specifically posed questions of margin and centre, of inclusion and exclusion, the in/visible, un/said, power and powerlessness. Seen in these terms, it becomes clear that the visual contrasts allude to social, political and economic inequalities, that the impenetrable box represents a centralisation of power, its emphatic closure underlining its inaccessibility, the short, diagonal bar signifying the limited engagement between those outside and those inside.

In his earlier Domestic Baggage series, Hartzenberg demonstrates his interest in commonplace, everyday objects, which are often imbued with hints of their metaphorical potential. In these terms, the function of a box as a container, a place to store things of value comes into play, elucidating the nature of power as defined by access to and control of resources. However, there is the simultaneous invitation to consider the commonplace association of a box, or being boxed, as being about categorisation. Through this lens, we see a critique of dominant taxonomies, seemingly omnipotent and secure for those who accept them, but from which most people are excluded.

While the above readings present generalised interpretations, a more localised lens introduces more specific concerns. In the context of post-apartheid South Africa, any work that plays on contrast between black presence and white space inevitably introduces the possibility of alluding to questions of colour, race and power. In this instance, the asymmetrical distribution between box and bar highlights an inequality within the very notion of blackness. In the Western Cape, the emphatic choice of a homogenising black colour sits uneasily with the ‘coloured question’ — political attempts to level ‘non-white’ as black do little to address prevalent perceptions of difference and questions of relative levels of oppression under colonialism and apartheid. In the context of Khayelitsha, questions of class differentiation become more acute, where local viewers, whether living in informal or small brick houses, are more likely to position themselves at different points of the bar, probably not far from the bolted end, rather than in the centre or even perimeter of the box. Seen from the vantage point of Khayelitsha, Base Load Profile visualises the polarity between city centre and the majority. From a micro-perspective, with the centre at Lookout Hill controlled by the municipality and not the community that inhabits the area in which it is situated, there are questions of alienation by residents from the venue itself. Observing this dynamic introduces yet another dimension of power. Moreover, the undeclared performative dimension that the sculpture ritually enacts — the very sense of exclusion from power that is experienced by most Khayelitsha residents — is analogous to the alienation experienced by local viewers when confronted by the impersonal presence of Hartzenberg’s sculpture.

Base Load Profile is a conceptual work that is clearly concerned with questions of power in society. It masquerades as a formalist sculpture and while claiming authorship of the work as an idea, Hartzenberg credits his colleague, Martin Hine, a workshop assistant from his place of employment, for the physical production of the work. This introduces the artist’s concerns with questions of ‘work’, and how certain forms, such as the intellectual work associated with art, separates the artist from the technician and labourer. These themes become more apparent when considering Hartzenberg’s untitled production for africa south. In this installation, Hartzenberg brought a well-used workbench into the gallery space. The workbench had a clamp at one end and a guillotine at the other. Alongside the clamp, there was a stack of identically sized sheets of glass. As with Base Load Profile, the deceptively static work included dramatic elements. The guillotine was raised, as if ready to activate. Normality, signified by everyday work materials, clashed with elements of incongruity, such as their presentation in the gallery, as well as the implicitly violent disjuncture between glass and tools. In the gallery context, glass panes suggest framing and conservation; Untitled exposed their vulnerability to the tools and operations of the real world. 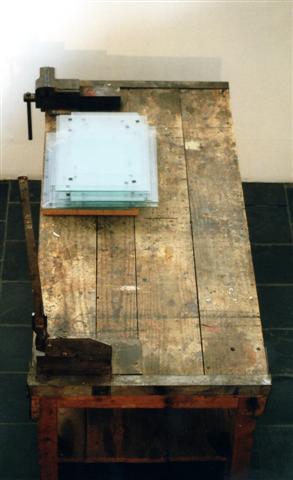 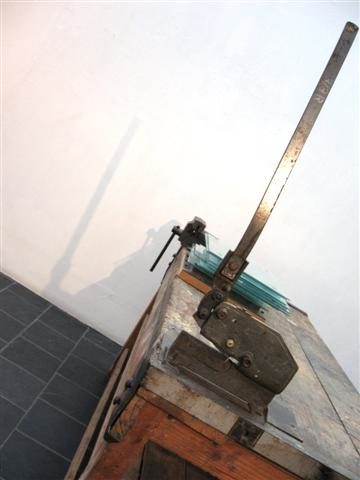 But what did this Dadaist displacement of art and the everyday have to do with the exhibition? A key concern of africa south was to consider the persistent legacies of colonialism in shaping the everyday. Hartzenberg’s workbench points to the disjuncture between art as historically privileged space and the world of work. Only through close examination does the work take on a more precise critical role within the context of its exhibition. [2] Placed discretely under the sheets of glass, concealed but visible to the forensic eye, is an assortment of very ordinary cutlery. This deceptively insignificant, obscure detail, once apprehended, becomes a powerful metaphor of the historical violence embedded in routine, at the base of the everyday. For what many, predominantly Western-educated, members of the public accept as normative, as ordinary is an intrusive element in advancing notions of Western civilisation. In a global context, where many cultures eat with their hands, cutlery is routinely placed, in colonially circumscribed order, for use by patrons in eating establishments, as well as in many homes. I have always taken this for granted, due to my own upbringing and socialisation. Hartzenberg’s discrete display of cutlery serves as a stark reminder that many everyday or normative rituals are in fact culturally coded, effectively discriminating against non-Western norms. With this work, the absence of a title acts as a notification that much goes unsaid, receiving little public comment. 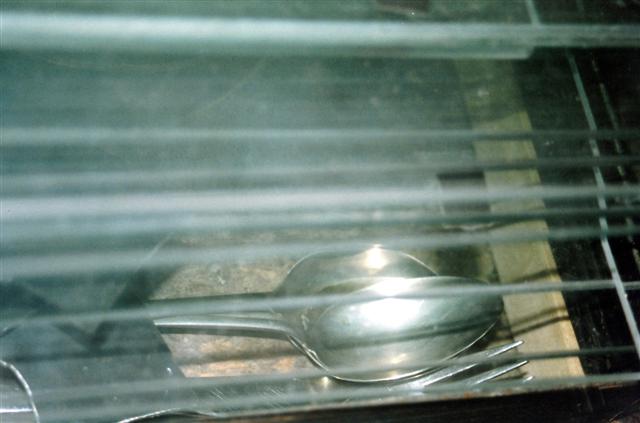 These two works by Hartzenberg demonstrate the artist’s predilection for physical pieces that are understated in form, but rich in allusions and significations. In providing these readings I am mindful of the risks in according fixed, literal meanings to art that presents itself in very abstract terms. The artist himself adopts the position that he does not prescribe readings. However, what I wish to articulate here is how artworks can be simply what they are, but that this non-elaborative, matter-of-fact presence can simultaneously allude to critical questions, arising from the particular sets of contexts in which the work is produced and presented. Such pieces require close examination of discrete elements and quiet introspection on questions of place and time. Through intimate engagement, their identity as provocative objects gradually becomes evident.

But perhaps Hartzenberg’s quiet provocations are even more challenging than they seem. For in engaging with them as works of art and in interpreting or attributing their meanings, they constantly remind us of their presence as objects. The artwork never stops prompting us to engage with the everyday, ceaselessly reminding us that the deceptive normality of things in our lives and the world at large is never one-dimensional. Everything is what it is, but means so much more, if we take the time to think about it.

[1] This board, actually two identical boards, was introduced for practical purposes, as we could not damage the floor by drilling into it.

[2] Very few viewers took time to look closely at what simply looked like an out-of-place bench. Indeed, with several visitors resting their wine glasses on the bench during the opening it appears that many did not recognise it as an artwork at all.