Salt On My Breath

Review of ‘Prints in the Artsstrip’ by Randolph Hartzenberg at the AVA Gallery: 14 July – 1 August 2008.
This text was originally published on Hartzenberg’s page on asai.co.za

The exhibition comprises works from Hartzenberg’s Monotype Series “Map of the Neighbourhood” and a selection of Screen Prints from his series “Abbreviations”. The contiguity of the imagery, metaphor and iconography make a powerful statement. They bear testimony to the artist’s concerns with the ‘inner neighbourhood’ that has evolved for more than a decade.

In the hallway of the exhibition I’m confronted by the first monotype with the Man Ray-like spiked iron cutting through space, a model of society’s bloodied canvas with translucent beams holding up a folder protruding the ebony edges of a face. The folder is reminiscent of the Nansen Passports that were used last century as identification and travel papers for refugees and illegal aliens. There are also black stairs in the air, coal dust and a line drawing prism containing the danse macabre of man carrying earthquakes on his shoulders. Inscribed on the dirty pink, brown, greenish, blood streaked and smudged background is “haptic vp //object.” It makes me ponder the significance of the virtual prototype it is referring to. Atlas carried the world on his shoulders while we, pygmies in the mist, bear earthquakes. 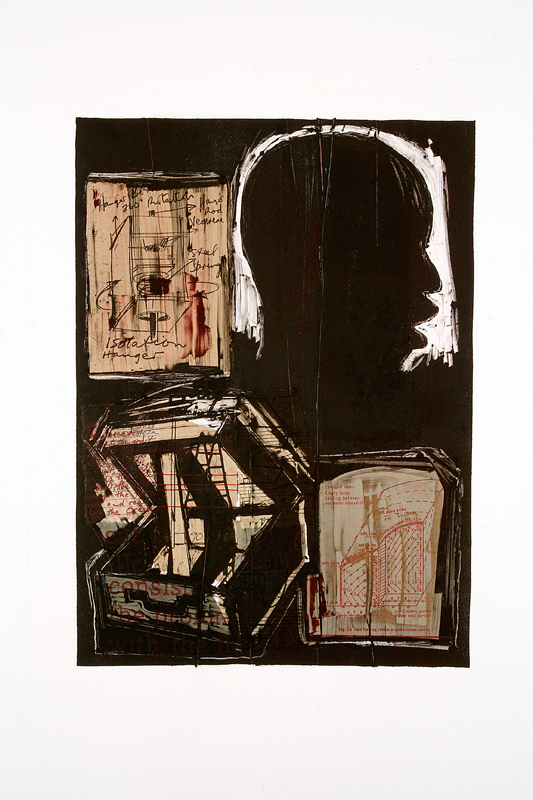 This monotype, invites the viewer to undertake a haptic and synesthetic quest. This is an interactive mode of art that returns your gaze. It is the signpost pointing to resolutions that will emerge only after engaging with each frame; unfolding like the frames of a movie. The collective impact of the show will yield the insights and resolutions. The viewer, however, will be unable to say “The End” and walk away. The stripped prints in the Artsstrip show, uncovered of their veils and socially rewarded pretensions shape-shifts the viewer into a dialectical image, which resists and evades resolution. The contiguity of the play of images induces an imagery of shock with revelation gaining control over estrangement.

I step inside, face the second monotype. Hlukuhla! I’m shaken awake. I grab my Molotov cocktail as the compass directs my eyes to scenes of dismemberment and decapitation. The black talking head contained in its sulphurous frame tells the tragedy of Orestes. The blades in the picture are not Carrol’s vorpal swords here; they’re sacrificial blades in medicine bottles, marinating in tumblers of blood. Indeed, “there are great puddles of blood on the world!” Yannis Ritsos’ poem, Orestes, surfaces. Orestes imploring, “Is this the right way?” echoes startlingly. Images of the crossed out, condemned head, silently transmits: “Listen with the ears of your heart.” I have just begun but I’m already overwhelmed as I’m confronted with the mapping of an expansive, ever expanding industrial and cybernetic wasteland which the exhibition is designed to reflect and condemn.

I walk on, pick out the leitmotifs, witness the recurring profiles of the decapitated heads imprisoned in their glowing sulphurous frames within the frames of the monotypes. My gaze is captured by the bodiless heads dialoguing across contiguously linked frames. The protruding mouths reflect their status as the ever expressive locus of conflict and pain. The heads are defiant. They say what they like; they’re “bloody but unbowed.” I find the mouths triggering an interior monologue in my head. Visions of Picasso’s Guernica, Munch’s Scream, Baudelaire’s Les Fleurs Du Mal, Prevertâs Song in the Blood, Fernando Botero’s Abu Ghraib, crowd my head. The process of re-membering is sparked. I am plunged into a Proustian remembrance of things past. 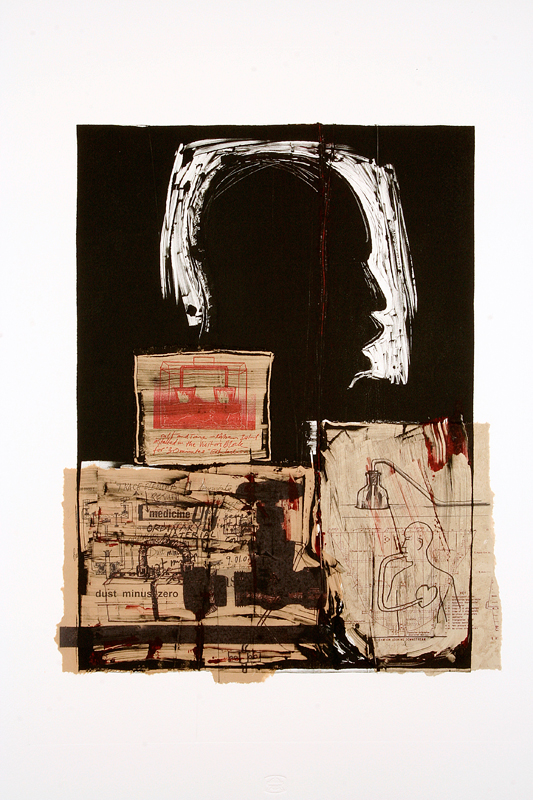 Submerged accretions of the crystallized salt of memory are cracked and shaken loose. Old wounds and sutures are re-opened and saltpetred. I begin to see shards of fragmented time melt down like Dali’s melted time-pieces, merging and collapsing into nightmare. Confronted with the long- forgotten runes of disappeared and unspeakable things I become muted. Expressing what I’m experiencing is hard. It becomes inexpressible. The illusion of “All’s well with the world” is rent apart as the interacting images relentlessly screen and map the salt, terror, pain and suffering endured across the timelines and still continuing in current time.

The exhibition dares me and I walk the mindful walk. Soon I concur that our planet is a theatre of cruelty, a universal alchemical theatre of the absurd that burgeons with flowers of evil. I am compelled to traverse the continuous, continuing cartography of our eyeless, sleeping neighbourhood. Each frame is a movie strip projecting the sacrificial blade, the blood, the writing against the wall, the time and the salt of our brutal past, present and future collapsed into one. Cruelty has been the same through time and is the same everywhere. In agreement with Jamieson (2007) “Artaud would sum it all up as common as “dust breeding… This spectacle of banality reigns supreme. It is the ugly spectacle of indifference, insignificance, and platitude; the opposite of the Theatre of cruelty. The man with earthquakes on his shoulders precipitates tremors, demands a break from the commodified, dislocated world silenced in the mists of banality.

I continue with the flow of the river of images that reveal the concretised patterns of cruelty and the cruelty of patterns as Salt Theatre and the Theatre of Cruelty unfolds before our eyes. We’re pushed right into the centre of the action. The strong medicine shocks us out of our complacency. Lee Jamieson explained that The Theatre of Cruelty aimed to hurl the spectator into the centre of the action, forcing them to engage with the performance on an instinctive level. For Artaud, this was a cruel, yet necessary act upon the spectator designed to shock them out of their complacency. 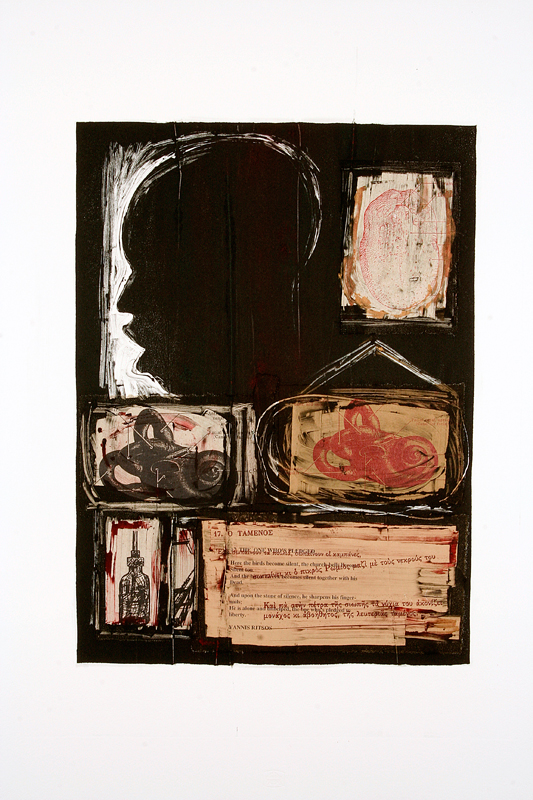 Psychic Myopia has become part of the human condition. Freud terms the blight as the “blindness of the seeing eye”. The artist, said Freud, “should be a seeing-eye dog for a myopic civilization.” Honouring this role, Hartzenberg employs the recurring trope of failing vision. It Hlukuhlas the enslaved mind to lazar its cataracts and experience the dislocated social fabric. It also demonstrates the unrelenting flourishing of dissident art through time.

I walk. I have salt on my breath. The salt stings my skin as I wrestle with the concept of tactile vision. My brain intuits that the recourse to sensory methods of vision is the result of Hartzenberg’s search for an aesthetic capable of depicting human society as it is, no frills, disrobed; to see and feel the perpetual wars and the chaos, transmit the will to transform and demand the need for a more humane paradigm. The power thought to inhere in the artistic gaze is challenged and questioned as this more inclusive, engaged art pleads to my sense of touch and compassion.

In his (2006) The African Renaissance: Confronting the Unspeakable paper, Hartzenberg in his role as poet-seer strongly articulates that the time has come for us to face up to the gravity of the crises we’re faced with:

“…a signal that desperation point has been reached … and that desperate measures are needed to salvage a better future for the [planet].

…locking ourselves inside ‘die huis van die dowes’ is no longer an option.

…When the signposts are down, when the map of the neighbourhood is a confused blur, when deep feelings of hurt rise to the surface, desperate questions become deafening… A truly humane movement is needed.”

The elements strewn across the monotypes call out for change:

This in mind I continue to feel my way along the map of images. My eyes see, hear and feel the silent commentary, sights and insights they yield. I am rendered wordless, beyond expression. The images reel around an unspeakable pivot recurrently depicting the memory chips of our losses, registering the signs and symbols of our historical excesses, the alchemical chaos required for change and the threshold between blindness, insight and transformation through the union of opposites.

The monotypes watch me watching them. They elicit the feeling of images watching us as we see and don’t see. We become unhinged by the uneasiness of being observed by much more than we’re able to see or read. They flood the viewer with the trope of a fast failing vision; we’re somnambulistic perambulators blind to all the signs we’re proffered. They provide the rude awakening that comes when we’re shocked into noticing. The signs have been there all along, but we weren’t. We were looking, but we weren’t seeing. We have forgotten how to look, see, read.

The recurrent mapping of this disturbing collaged symbolic imagery alerts the viewer to the precarious state that the canvas of our world is in. The hallowed talking heads in the mapped dreamscapes of facelessness, erasure, terror, brutality, torture, drag the viewer into taking sides, siding with the abject and asking, “Is this how it ends?” Arranged dialogically the heads spell out that wars, suffering, and social dislocation has been part of the marathon or neverending story, of tyrannical patriarchal power exercised across time and time zones.

Still walking I see that print upon print also memorializes lost histories. Histories we have chosen to forget. They silently scream out for us to connect with the images, feel the salt on our breath; learn to demythologize the packed symbols and read them historically. The monotypes haptically reveal the ways power structures operate. They invite us to look for the power behind the disturbing images, to discover and uncover the invisible, alternative realities, our lost or archived histories. The shock of the horror is capable of opening us up. It’s imperative that we do not forget as Merlin in Excalibur warned, “… for it is the doom of men that they forget.”

Hartzenberg solders together disparate things such as the brain as black box, depicted as a musical Pandora’s box left open, humans as breath vessels, crushed glass, saltpetre, strange fruit and flowers of evil like the blades and a slip from Orestes’ tree flourishing in blood-filled planters, nails, a detached brass tap tarnished with spattered blood, pails cold-bloodily engaged in the perpetual pumping of blood darkened with memory, scattered ears like disconnected snail shells, handwritten poems superimposed on the imagery in Greek and English, the bloodied Book opened on a page urging the viewer to Walk/Walk and read, dusty stands with shelves laden with pyramids of excavated or incinerated human debris, specimens of humanity bottled and commodified for posterity, isolation hangars, ballot boxes with drawers for the voteless, with voice withheld, breath withheld, Dust, Dust Minus Zero and the artist paring his fingernails on a rock. Thrown together in the constraints of their frames we witness how the play of the objects are brought into close proximity while they still retain their own identity, but create brand-new form, by the energy of things juxtaposed.

The walking, reading and excavating triggered by the collective impact of the monotypes and their abbreviations left me stirred and inspired and driven to act, Read the Oresteia. I accede that “in [our] time of crisis there is a greater need for the activation of the humane in the midst of so much subterfuge,” as shamanic artist, Randolph Hartzenberg had said.

[1] “In the Wake of Poseidon ~World on the Scales”. www.songsouponsea.com/Promenade/PoseidonC.html

Hugo Heyrman. “Art and Synesthesia: in search of the
synesthetic experience”. www.doctorhugo.org/synaesthesia/ – 92k

William Bogard. “1000 Days of Theory, The Coils of a Serpent: Haptic Space and Control Societies”. CTheory.net