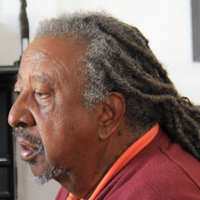 A former political prisoner, Lionel Davis’ name features prominently in the history of the Community Arts Project, Vakalisa Art Associates, Thupelo Workshop and Greatmore Artists Studios. Drawing, painting, and printing, and often combining these media, Davis works in visual modes that range from the realist to the abstract. His themes include everyday scenes as well as reflections on black and African identity.

[Show slideshow]
This was initially published online in 2003 (on the Africa Centre’s Contemporary Africa Database, now defunct). It appears here in its original form.
Lionel Davis profile (published at www.africaexpert.org.uk)

Political activist and prisoner turned artist and educator, Lionel Davis cuts a distinct figure in the South African arts and culture landscape. A living archive, he has lived a significant part of his life in or on two of apartheids most notorious symbols, District Six and Robben Island. He has also been closely involved with two key arts organisations, the Community Arts Project (CAP) and the Thupelo Workshop.

It was at an early age growing up in District Six that Davis “became aware of the brutality of police, especially white police, in their attitude to and treatment of people of colour”. Davis says that “this became more of an issue for me, and I always used to stand up for people who were being pushed around. This got me into trouble, and into fights… I was caned once by the police for allegedly hitting a white woman in Woodstock, when I was trying to defend a colleague…”. Aware of the need to educate himself Davis attended night school (on the site where Harold Cressy School now stands), where then in his mid-twenties, he met members of the Non European Unity Movement (NEUM) and began attending political meetings. Davis joined APDUSA (African Peoples Democratic Union of South Africa), an off-shoot of the NEUM, but grew disenchanted with them, describing APDUSA as a “theory shop”. He was part of the core group led by Neville Alexander that broke away from APDUSA to form the Mao Tse Tung inspired National Liberation Front, whose goal was to use arms to overthrow the state. In 1964 he was among a group of eleven that was sentenced to gaol for ‘Conspiring to Commit Sabotage’.

During his seven year sentence Davis completed his schooling by correspondence. Released in 1971 and placed under house arrest he worked as a labourer and then a clerk on building sites, until one day in 1978 he chanced upon CAP, then in infant form. At CAP Davis would go on to play multiple roles for over two decades. From his initial role as cleaner/ handyman/ assistant administrator and student, Davis went on to be a long serving art educator/trainer/ facilitator, specialising in drawing, screen-printing and mural painting, teaching children, youth and adults. He also played a leadership role in CAP: he was elected chairperson in 1988, playing the role of co-ordinator (or acting director); and in the nineties he served two years as a Trustee.

Prior to CAP, Davis’ had no previous art tuition. His art experience was limited to his childhood, drawing cartoon heroes with found materials on the streets and walls of District Six. At CAP he proved to be a diligent student, quickly mastering drawing, the medium that has remained the back-bone to his artistic practice. He was introduced to lino-cut printing by resident artist Mpathi Gocini, who came to CAP via the Evangelical Arts & Crafts Centre in Natal, better known by its location at Rorkes Drift. In 1980 Davis went to Rorkes Drift where he spent two years, returning to Cape Town with a diploma in Fine Arts. It was at Rorkes Drift that Davis learned new graphic techniques and began to appreciate the potential of screen-printing as a medium. His stay there was also important for his artistic development because it brought him into contact with other black artists nationally, paving the way for his later involvement with the Thupelo Workshop.

In 1982 Davis assisted in organising the Cape Town contingent to attend the Culture & Resistance Symposium in Gaborone, organised by the African National Congress (ANC). This is widely regarded as a seminal event which was responsible for recognising the role of artists in cultural resistance, and for shifting the notion of ‘artist’ to that of ‘cultural worker’. A direct outcome of this event was the establishment of a Poster Workshop at CAP. It was here, and its later incarnation as the CAP Media Project that Davis was active for most of the 80s as a screenprint facilitator. Initially most of this work involved producing posters, t-shirts, and banners, much of it political in content. Much of this was done on behalf of political and community organisations, and was frequently banned or confiscated by authorities; whereas his later work for the Media Project entailed training members of community and political organisations to produce their own media.

Davis also played a political role at CAP, especially in countering what he perceived as the hegemonic tendencies of political organisations.Following the launch in 1983 of the United Democratic Front (the internally based resistance movement that was politically aligned to the ANC), there was pressure on CAP to affiliate to the UDF. Similar pressures resurfaced in the late eighties. Davis says of CAP that “[although it] wished to play a political role in the struggle it did not see itself as being party political and made its facilities available to all progressive political tendencies.” He is proud of the role he played in communicating CAP’s non-aligned position to a range of political organisations, especially trade unions and community groupings who may have been alienated, or possibly denied access, by a politically aligned CAP.

In 1987 Davis attended the International Triangle Workshop in New York, an initiative that had given rise to the Thupelo Project a few years earlier. Davis was a Thupelo stalwart, serving as a Trustee for eleven years, and attending no less than nine national workshops between 1986 and 2001. He also attended triangle affiliated workshops in Botswana and Zimbabwe. Thupelo was initially best known for encouraging exploration of materials, and initially this resulted in a mass of abstract paintings. That many black artists abandoned (at least temporarily) more realist modes of working in favour of a painting style and approach that some radical critiques saw as an expression of American cultural imerialism, meant that Thupelo received a mixed reception on the left, whilst being welcomed by establishment voices such as the SA National Gallery’s Marilyn Martin. For many of the artists who were invited to these workshops, Thupelo was undeniably a liberating experience. For Davis, Thupelo was an important part of his exploration of painting, a media to which he had previously had limited access, and he derided his critics claiming that he had never had the opportunities to ‘play’ with art materials, something that was taken for granted as part of (mostly white) privileged children’s development. He also benefitted from Thupelo’s emphasis on scale, and some of his works from Thupelo, such as African Sunset, are among his best known.

Davis also worked as an art educator for the SA National Gallery (SANG), where he was responsible for teaching primary school teachers from the townships to teach art to children. This built on his experience teaching children (in the early eighties) and as media trainer at CAP, as well as the training he undertook (in the nineties) for a diploma from the Curriculum Development Project in teaching teachers to teach art in schools. He also served as a Trustee of the SANG as part of its first ‘democratically constituted’ Board. While the national galleries of Zimbabwe (who have used Davis three times an international ajudicator) and Botswana have bought works from Davis for their collection, the SANG has yet to acquire one of his works.

Davis’ current employer, the Robben Island Museum, has provided him with the unique opportunity to live on the site where he was once imprisoned. Initially employed as a tour guide along with other former political prisoners, Davis is now employed by the Museum as Heritage Educator and does much of his work with secondary school pupils. He plans to retire in three years, when at the ripe age of seventy we can expect his art to bloom like never before. Indeed Davis’ road to becoming an artist has been a much longer one than most other artists. He was 42 when he started classes at CAP and 58 when he graduated as a Fine Artist at UCT. His work has been exhibited in numerous group shows at home and abroad (USA, England, Germany, Greece), but he has never had a solo show. A Lionel Davis retrospective is clearly overdue.

The Neglected Tradition – Towards a New History of South African art, 1988.

Turning to one another – Simple conversations to restore hope to the future, Margaret Wheatley. Published by Berrett-Koehler Publishers, 2002.

(School Project) – The Significance of CAP in the lives of Sydney Holo and Lionel Davis, Hannah Schultz 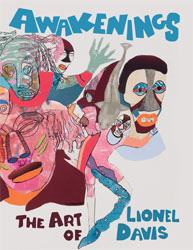